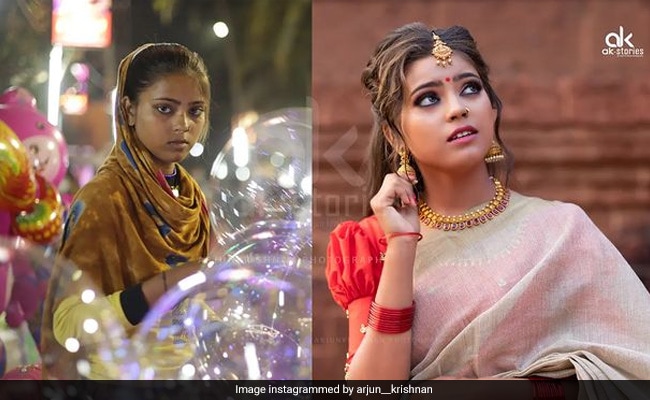 Kisbu was spotted selling balloons near a temple in Kerala.

In a testament to the power of social media, a street hawker from Kerala has become an Internet sensation after photos of her makeover went viral. Kisbu was selling balloons near a temple when she was spotted by photographer Arjun Krishnan. The photographer quickly took a few pictures of the teenager, one of which he later posted on Instagram. The response it received was unexpected – the photo quickly went viral online and led to Kisbu starring in a photoshoot that has captivated the Internet.

Photographer Arjun Krishnan told NDTV that he spotted Kisbu selling balloons at the Andalur Kavu festival on January 17. Struck by her unassuming elegance, he quickly took out his camera and took a picture of the teenager.

After taking a couple of more photographs, he approached Kisbu and her mother and showed them the pics he had taken. Arjun says they were delighted by the pictures.

Soon afterwards, he shared the photo on social media, where it went viral and led to someone getting in touch with Kisbu and her family, reports India Today. After getting Kisbu’s family to agree to a photo shoot, makeup artist Remya Prajul got working on her transformation.

According to Remya, the makeover began at 4 am, with Kisbu receiving a manicure, pedicure and facial. To make sure she was comfortable, each step was explained to her along the way. Take a look at some photos from the photo shoot below:

For the photo shoot, Kisbu was styled in a traditional kasavu saree with gold jewellery. Photos from the shoot, shared on Instagram by Arjun Krishnan, received an overwhelming response. The pics have registered tens of thousands of ‘likes’ and compliments on the photo and video-sharing platform.

Something similar happened recently when a labourer from Kerala also found fame on social media. Mammikka, who belongs to Kerala’s Kozhikode district, made a splash online with his swish makeover as he posed for a local brand.

How To Stay Calm In Traffic? Viral Video By Delhi Police Explains