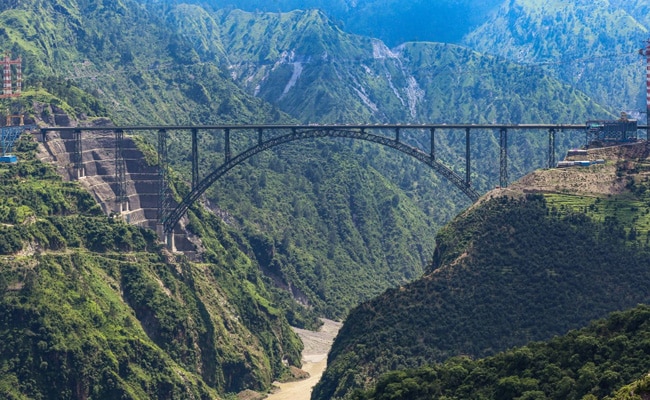 The bridge will be 35 meters higher than the Eiffel Tower.

The golden joint of the world’s highest railway bridge over River Chenab was inaugurated on Saturday.

For the first time ever since independence, Srinagar will be linked to the rest of India after the overarch deck on the world’s highest single-arch railway bridge over River Chenab will be launched.

From the two ends of the River Chenab valley, the bridge superstructure on the arch was being gradually pushed, and it will eventually connect at the Center of the arch.

Speaking to ANI, Sanjay Gupta, Chairman and MD, Konkan Railway said, “This has been a long journey. The term ‘Golden Joint’ was coined by civil engineers… It’s the world’s highest railway bridge.”

Chenab Bridge was a famous bridge with intricate engineering that had to overcome several challenges. The geology, the harsh terrain, and the hostile environment were just a few of the challenges that the engineers and railway officials had to overcome to get to this point.

“We can confidently state that the bridge would be roughly 98 per cent complete after the golden joint is finished,” said Giridhar Rajagopalan, Deputy Managing Director of Afcons.

“When we completed the arch closure project last year, we felt a great sense of relief about our ability to complete the project accurately so that there was no mismatch. And that gave us a great deal of confidence to easily handle the project’s balance portion. We are excitedly anticipating the upcoming golden joint milestone with NR and KRCL,” Mr Rajagopalan continued.

The world’s highest railway bridge is now being built, and when it is finished, it will be 35 meters higher than the Eiffel Tower.

Afcons is building 16 additional railway bridges for Konkan Railway Corporation Limited (KRCL) in the dangerous terrain of Jammu and Kashmir in addition to the Chenab Bridge. All the bridges are part of the Udhampur Srinagar Baramulla Rail Link (USBRL) project.

The entire event took place in Jammu and Kashmir’s steep Sangaldan at a height of more than 90 meters above the surrounding countryside.