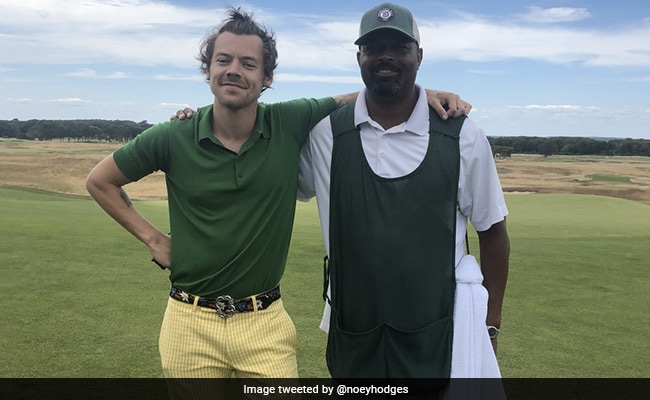 The post has garnered over 5 lakh likes and has been retweeted more than 24,000 times.

The internet is filled with hilarious conversations between parents and their children. Now, a post about a father telling his daughter that he took a picture with someone “pretty famous” but didn’t know his name has gone viral on Twitter.

The daughter, named Noey Hodges, shared a picture of her father with English singer and songwriter Harry Styles. In the caption, she revealed that her father had texted her about meeting someone famous. However, when she asked him for the celebrity’s name, the father replied that he didn’t know his name but managed to click a picture.

My dad was like “I met a guy today apparently he’s pretty famous”
I’m like “cool, who”
he like “idk his name” then sends a picture. Tell me why it’s harry styles lol pic.twitter.com/9QuguDGZxW

The famous person turned out to be the former member of One Direction. Ms Hodges’ father and Harry Styles were seen posing at a golf course. The two were seen keeping their hands around each other’s shoulders.

Also Read | “A Lesson In Fighting With Grace”: Man’s Post About His Wife’s Battle With Cancer Moves Internet

In the caption, Ms Hodges wrote, “My dad was like ‘I met a guy today apparently he’s pretty famous’. I’m like ‘cool, who.’ He like ‘idk his name’ then sends a picture. Tell me why it’s Harry Styles. Lol.”

In the following tweet, she also added, “My dad is loving this lol. He said this is confirmation that all his dad jokes are funny lol.”

Since being shared, the post has taken the internet by storm. While some internet users found the post hilarious, others were simply in disbelief.

One user wrote, “Tell me why I thought your dad was the famous person and I zoomed in to try and figure out who he was Hahhahaha.” Another added, “greatest dad ever.”

A third shared his own incident and wrote, “My parents met Emma Stone at an event. Didn’t know who she was but was told she was a famous actress. Emma’s companion offered to take the picture, and instead of asking him to be in the picture, too, they said Sure. It was Andrew Garfield.” A fourth said, “So cute. Your dad is awesome.”

The post has garnered over five lakh likes and has been retweeted more than 24,000 times.