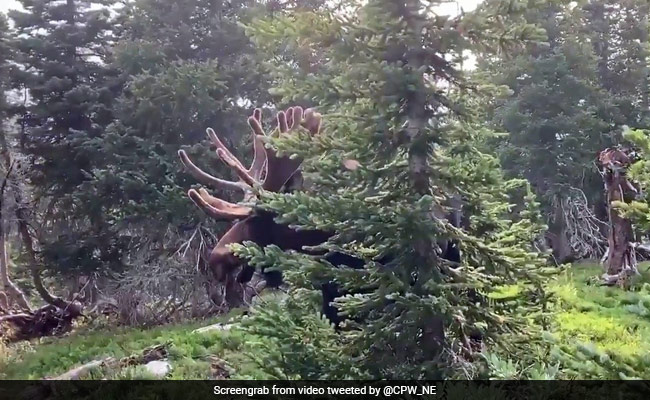 A bull moose charges at a person in this hair-raising video.

This is the terrifying moment a bull moose suddenly charged at a person filming it from a short distance away. A video from Colorado Parks and Wildlife shows the animal going from peaceful to aggressive in the fraction of a second, and it is now being used by park authorities as a warning to curious visitors. “This video is an example of being too close to a bull moose and how quickly they can decide to charge on you,” Colorado Parks and Wildlife wrote while sharing the video, which was recorded at Clear Creek County.

In the video, which was shared online this Sunday, the massive bull moose can be seen eating from a tree as a hiker filmed it from a few metres away. According to the agency, the person who was filming the moose — and eventually got attacked by it — had happened to come across the animal quite by chance.

This video is an example of being too close to a bull moose and how quickly they can decide to charge on you.

It is from Clear Creek County. The individual just by chance came upon the bull walking along a willow bottom heading towards a lake. pic.twitter.com/Z2usuHpPit

Footage shows the bull moose lifting its head and going from unconcerned to aggressive in the blink of an eye. The moose charges at the person filming the video, forcing him to run for cover.

Fortunately, the man managed to hide behind a tree and the moose hit the tree instead, Colorado Parks and Wildlife said in a follow-up tweet.

Moose are Colorado’s largest wild animal, growing up to six feet tall. Each year, more people are attacked by moose than by any other animal, according to Colorado Parks and Wildlife.