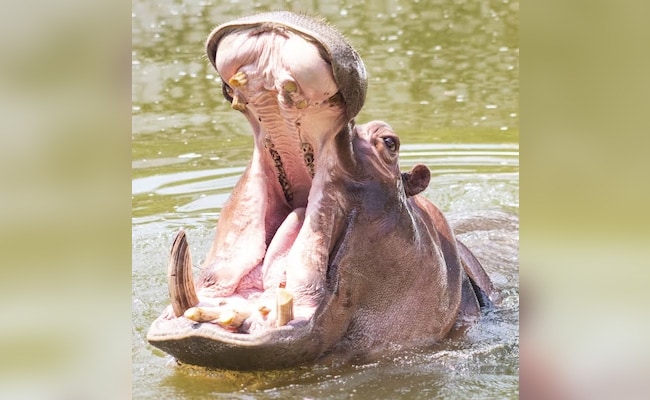 The hippo spit the toddler back out after an onlooker pelted stones at the animal.

In a miracle, a two-year-old boy survived after being gulped down by a rogue hippopotamus in Uganda. The hippo spit the toddler back out after an onlooker pelted stones at the animal, Capital FM Uganda reported citing police.

According to the outlet, the toddler was playing near his home on the shores of a lake in Katwe Kabatoro town on December 4 when the hungry hippo grabbed him with its huge jaws. Before the animal could swallow him completely, Chrispas Bagonza, a by-stander, began throwing rocks at it. This caused it to “vomit” the boy back up, Capital FM Uganda added.

The police identified the toddler as Iga Paul and said that the animal grabbed him from the head and swallowed half of his body. They added that the boy had sustained injuries on the hand and was sent to hospital for further treatment. “The victim was immediately rushed for treatment to a nearby clinic, for injuries on the hand and later transferred to Bwera Hospital for further treatment. He recovered fully and was discharged, after receiving a vaccine for rabies. He was thereafter, handed over to the parents by police,” the Uganda Police added in a press release.

However, a police spokesperson warned parents staying near animal sanctuaries such as lakes and wildlife centres to be on the lookout for stray animals such as crocodiles and hippos that may attack them.

Hippos, despite being herbivores, can be extremely aggressive when threatened. They have also been observed charging and attacking boats and canoes. A few months ago, three lions who were attempting to cross a river at the Selinda Reserve spillway in Botswana were intercepted by an angry hippo. The Great Plains Conservation shared the video of the incident on YouTube and called it an “unforgettable moment”.

According to AZ Animals, there are about 500 deaths per year to humans in Africa due to hippo attacks. The number is strikingly big, outnumbering nearly every other animal on the planet. They add that hippos are among the world’s deadliest land animals.