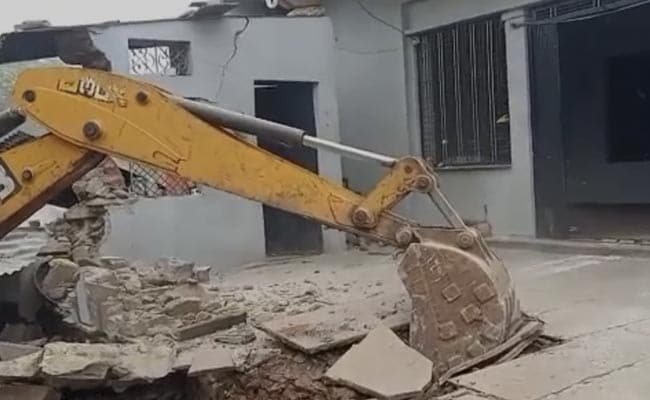 The district administration carried out the demolition drive on illegal properties of the accused.

Days after a tribal man was assaulted in Neemuch district of Madhya Pradesh and then dragged by a pick-up truck, leading to his death, the district administration today razed the illegal properties of those accused in the murder case.

Visuals show a earth mover at work at a single-storey house. Mahendra Gurjar, the husband of the village sarpanch, was among the people whose properties were demolished.

Kanhaiyalal Bheel, 45, was beaten up badly on Thursday on the suspicion of theft. Thereafter, with a rope tied around his feet, he was dragged by a pick-up truck.

Those assaulting him had dialled the police helpline, claiming they had caught a thief. On reaching the spot, police rushed Kanhaiyalal to a nearby community health centre. He was referred to the district hospital, where he was declared dead.

Visuals of the tragedy were widely circulated on social media. A clip clip shows a sandal-clad man hitting the tribal man on the face even as he pleads to let him go.

Police have identified eight people in the case and arrested five of them. Besides murder, the accused have been charged under other sections of the IPC and the SC/ST (Prevention of Atrocities) Act.