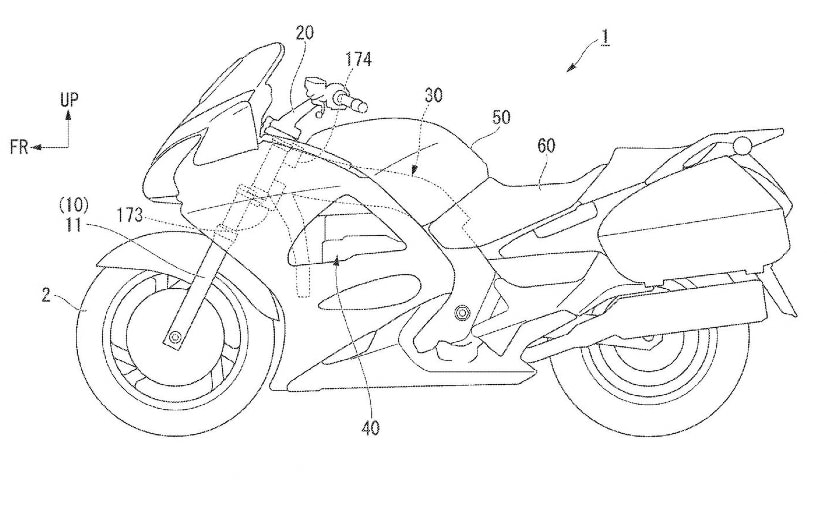 Honda‘s latest patent images reveal the next-level advanced rider assist system (ARAS), which not just features radar, but also uses a camera, a gyroscopic sensor and lidar (light detection and ranging). According to the patent, the system has been designed to address a very specific, but unlikely set of circumstances, and is intended to become active if there’s been an accident, where the rider has come off the bike, but the motorcycle has remained upright and is continuing down the road without anyone at the controls.

Also Read: What To Expect From Honda NX200 The system has been designed to act, in case of an accident when the rider is thrown off the motorcycle, which is still in motion

Such circumstances are seen in motorcycle racing when the rider is thrown off and the bike regains grip and continues on its own. It’s not clear of the likelihood of such scenarios in the real world, but Honda seems to think that it’s a potential situation which may harm other road users, and so the technology to avoid such mishaps. According to the patent, the bike has a steering actuator configured to steer the front wheel, an actuator control unit configured to control the steering actuator, a collision determination unit configured to determine whether or not a collision has occurred in the host vehicle, and a riding determination unit configured to determine whether or not an occupant is riding the host vehicle. The system will use a combination of gyro sensor, a camera, radar and lidar

The system consisting of radar, camera, a gyro sensor and lidar uses lasers to build a picture of the bike’s surroundings and is connected to a computer that also monitors whether or not there’s a collision, and whether there’s a rider in the seat. In situations where there’s no rider on the bike, but it’s still moving, the computer takes control. The setup has the ability to actually see what’s around the bike, and the computer can control the bike’s direction and speed to avoid hitting stationary objects or other vehicles and stop it from getting onto a pavement where it might pose a danger to pedestrians. If there’s no risk of hitting anything, the system will allow the bike to fall over, keeping the handlebars straight, to avoid any major damage to the bodywork, with the handlebars absorbing the worst of the impact.

The system may look like an autonomous safety system, but there’s no reason why Honda cannot tweak the system to offer advanced semi-autonomous cruise control, or to actually correct ill-judged steering inputs from the rider to avoid a potential crash. At this stage though, it’s still a concept, and it will be interesting to see how and when Honda ends up using this system, in whole, or in part, in a production model.