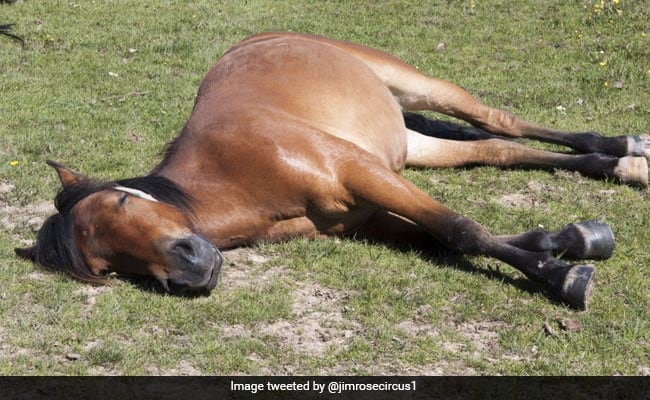 A horse named Sugar has gone viral on the internet for pretending to be asleep when she doesn’t feel like working.

Taking to Twitter, Jim Rose shared a photo of Sugar resting on her side in the grass as if taking a snooze. The caption of the post read, “Meet Sugar, she doesn’t like to be ridden. If Sugar is approached with a saddle she lies down and pretends to be asleep. Sugar refuses to open her eyes until the riders leave.”

Meet Sugar, she doesn’t like to be ridden. If Sugar is approached with a saddle she lyes down and pretends to be asleep. Sugar refuses to open her eyes until the riders leave. pic.twitter.com/FWaKYoKlHx

Since being shared, the post has taken the internet by storm. It has garnered more than 476,000 likes and over 41,000 retweets. Netizens evidently found their “spirit animal” in Sugar.

While one user wrote, “Sugar is my spirit animal,” another said, “Me as a horse, to be honest.” “Smart horse,” wrote third. “Good horse. I wish this worked in my office. I don’t like to be ridden either,” added fourth.

One concerned user also thought that Sugar was dead. “Omg I want her to get up like isn’t laying down bad for horses wtf I have never seen a horse laying down. I thought they didn’t do that unless they were literally dying. Woah,” the user wrote.

However, according to horse enthusiasts in the replies, horses do actually lie down to sleep. Separately, New York Post, citing animal behaviour expert Dr Susan Hazel, reported that the tendency is more common for the species during heavier sleep.

Meanwhile, a while back another video of a horse viral on the internet. The clip showed a horse hilariously running around in circles after spotting an alligator steadily crossing a racetrack in the United States. The video had garnered thousands of likes and comments.