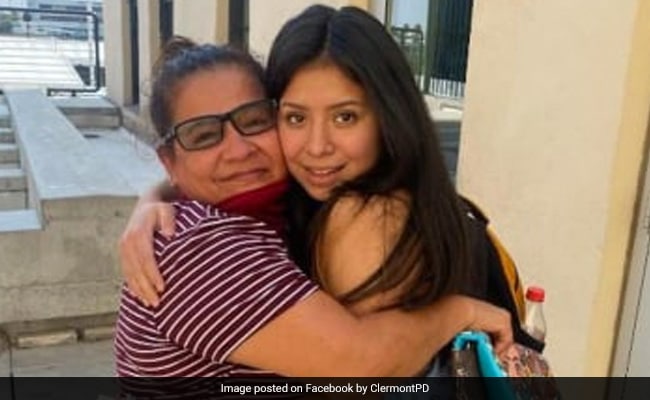 Jacqueline Hernandez was reunited with her mother after 14 years.

A missing teenager from Florida was reunited with her mother at the US-Mexico border after she was abducted 14 years ago. Their official reunion took place on Monday in Texas, though the two had first met at the border last week. The mother and the daughter reunited after a reported social media communication between them. Jacqueline Hernandez, 19, contacted her mother Angelica Vences-Salgado over Facebook earlier this month and told her that she was currently living in Mexico.

A press release by the Clermont Police Department (CPD) called it a cold case until this month. On September 2, 2021, Ms Vences-Salgado told CPD that she was contacted by a woman who claimed to be her lost daughter. She revealed that the woman had asked her to meet at the point of entry to the US in Laredo, Texas on September 10, 2021.

Following this intimation, police forces in Florida and Texas and investigators from the Department of Homeland Security laid out a plan to “intercept” the meeting and verify Ms Hernandez’s identity.

Within hours of interception, officials verified documents provided by the different agencies involved and concluded that the woman from Mexico was, indeed, the missing daughter of Ms Vences-Salgado.

As per a BBC report, on December 22, 2007, six-year-old Ms Hernandez was allegedly abducted from her home in Clermont, Florida, by her father Pablo Hernandez.

The press release on Facebook has users expressing their love and concern to the mother and the daughter. A user wrote, “Incredible and such an emotional story. So happy for a happy ending but can’t imagine the agony all those years. Prayers for the missing.”

Another said, “Congratulations CPD. You are awesome the way you take credit after this girl found her mother and made their reunion possible. But you do get to close the case, so there’s that.”

“Thank you for going the extra mile to make sure nothing goes wrong and they are both safe,” read one of the comments.

We aren’t surprised by social media responses. After all, who wouldn’t celebrate such a dramatic reunion?