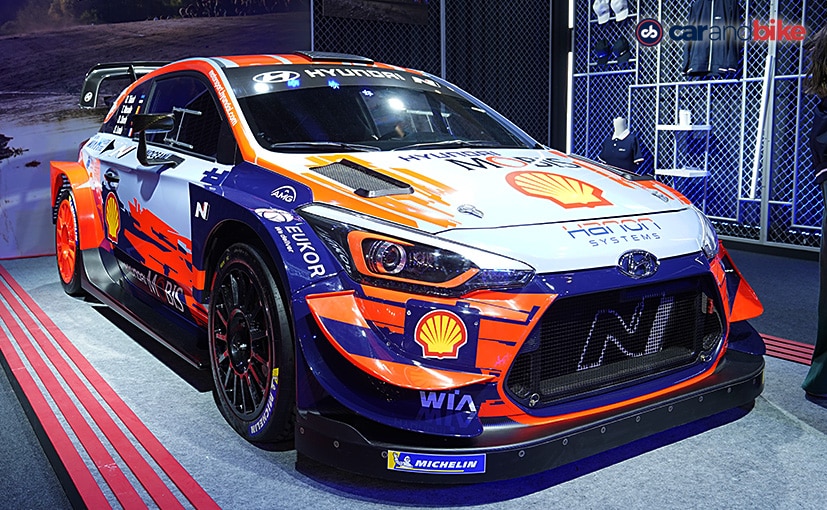 The Hyundai i20 WRC has been a stellar performer at the World Rally Championship (WRC) which is the epitome of motorsports when it comes to rally driving and for the first time it’s been showcased in India at Hyundai’s Creators’ Arena.

The Hyundai i20 N WRC has been a stellar performer at WRC.

We’ve always seen practical models from Hyundai make their way to India but now with the i20 N Line, the company is ensuring that it shows off its sporty bent of mind too. After the Hyundai N Line that went on sale recently in India, the Korean brand has showcased the Hyundai i20 N World Rally Car which is based on the i20, but promises a big dose of adrenaline. Now this race car has been a stellar performer at the World Rally Championship (WRC) which is the epitome of motorsports when it comes to rally driving and for the first time it’s been showcased in India at Hyundai’s Creators’ Arena. 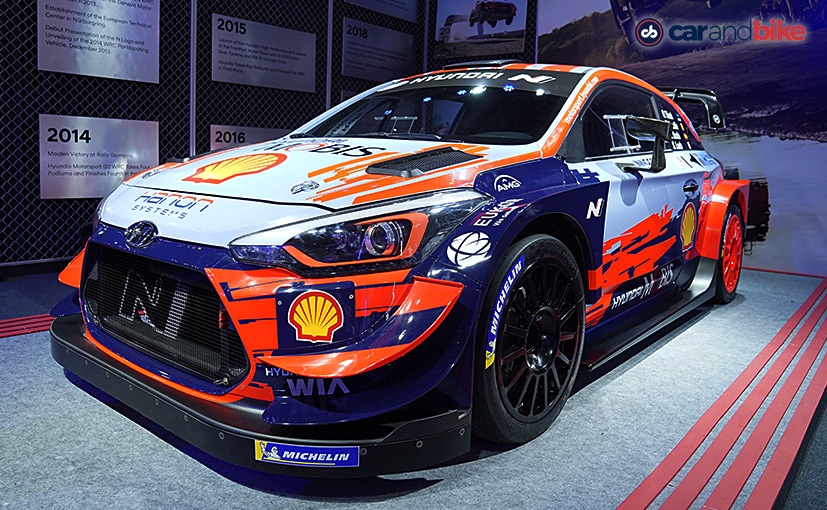 Well! It’s a beast and that outrageous power comes from a 1.6-litre, in-line four-cylinder direct injected motor under its hood that belts out a healthy 375 bhp at 6500 rpm and 450 Nm of peak torque at 5500 rpm, offering pull for a 0-100 kmph run in less than 4 seconds. This powerhouse is mated to a six-speed sequential gearbox with paddle shifters coupled with a four-wheel drive (4WD) system and 36 mm air restrictor optimising the pressure for maximum performance. Further enhancing the performance are mechanical front and rear differentials along with an electro-hydraulic centre differential and ceramic twin-disc clutch further adds to the engagement. 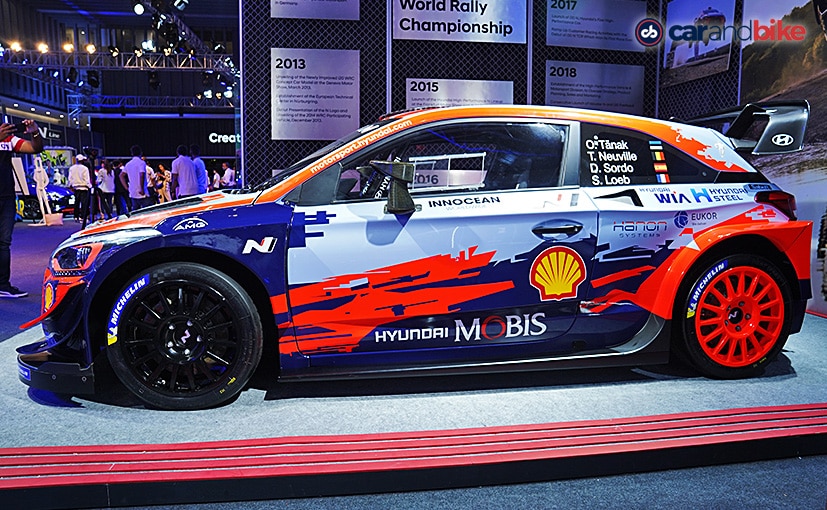 The body is made of steel and composite fibre and on the inside the only thing adding to its weight is the solid roll cage.

So yes! Mechanically it is absolutely ready to take on any rally stage and if you have seen it skipping and plunging around the rally circuit, that’s courtesy MacPherson struts chamber suspension at all corners with adjustable dampers that have enough play for the jump while are firm for those breathtaking corner and terrain actions. Then, the body is made of steel and composite fibre and on the inside the only thing adding to its weight is the solid roll cage. Well that’s to keep in tune with the FIA regulations of course! Those OMP bucket seats along with steering and control mechanicals keeps its weight down to just 1190 kg for an enhanced power-to-weight ratio.

Also Read: Hyundai Rolls Out Discounts Of Up To ₹ 50,000 On Select Cars 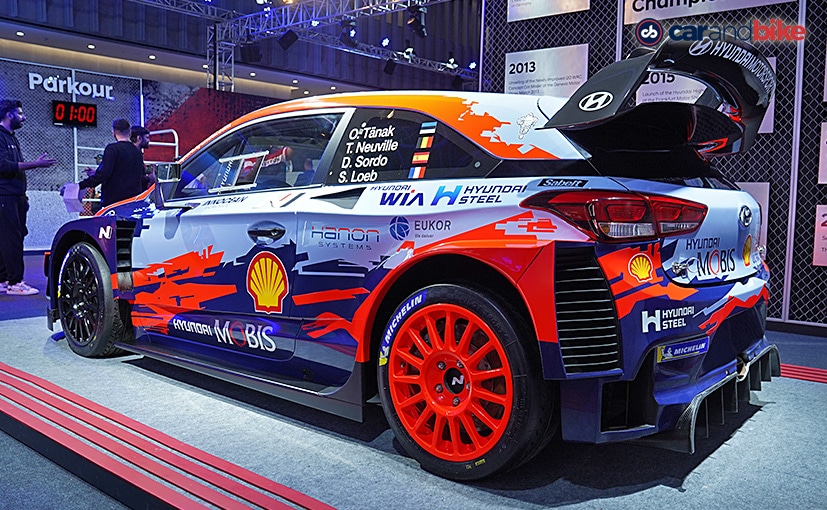 The wheel and the low profile tyres. Michelin units and even the spoiler, looks very cool, very sexy

And yes! A lot has gone in its design as well. We haven’t seen anything sportier than this from Hyundai. The WRC car looks downright sexy. The wheel and the low profile tyres. Michelin units and even the spoiler, looks very cool, very sexy in one and the low stance, it speaks sportiness. The hunkered down front-end, nose-dipping front diffuser, air ducts on the sides and vents on the hood to cool down that hyper engine, all of it work in tandem to boost its performance while still keeping it planted to the road. And the rear of the car too is no less dramatic complimenting the entire design language. It looks really sporty and elements like this sharp diffuser, a single but throaty exhaust note, the wing that gives all the downforce and reduce drag, the side tunnel and the one at the bottom, everything complements the sporty and sexy design. 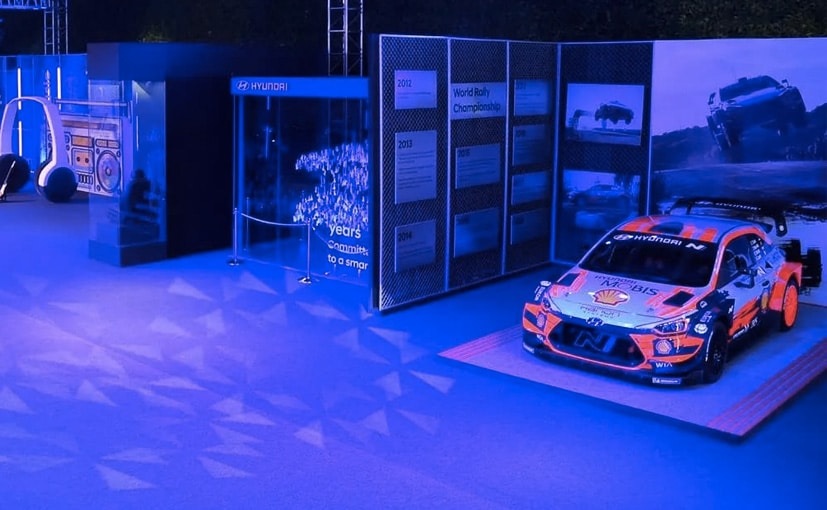 It had all the eyeballs glued at Hyundai’s creators’ arena.

By now it’s quite evident how different this WRC car is from a regular i20 and so are its dimensions. It is around 150 mm longer than the i20 hatch and is 4100 mm in length and 1875 mm in width and the wheelbase is 2570 mm in long. In flesh, it doesn’t look tiny like a sub-four metre by any stretch of the imagination. And speaking of that, while it had all the eyeballs glued at Hyundai’s creators’ arena, WRC is where this beast is seen in its element and we hope to see it smashing that terrain soon.