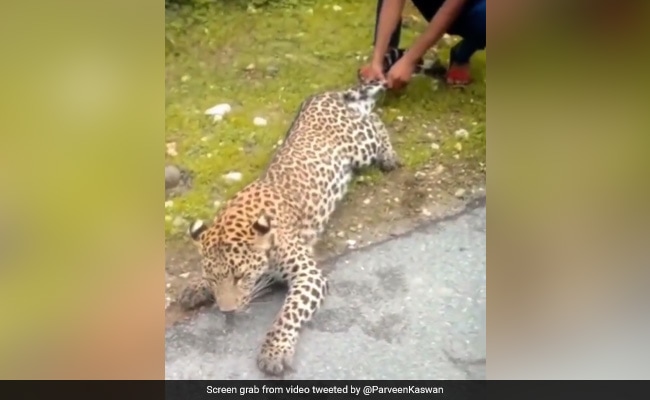 The leopard died, a text on the video said.

A shocking video of a person pulling a leopard by its tail has surfaced online. In the 20-second clip shared by Indian Forest Services (IFS) officer Parveen Kaswan on Twitter, a man is seen holding the leopard by its tail and one of its hind legs. The animal is seen trying to free itself from his clutches but fails as onlookers are seen filming the act from a distance. The leopard died, a text on the video said.

The location where the video was shot could not be ascertained, according to Mr Kaswan who denounced the act and stressed that wild animals should not be treated this way. “This is not the way to handle or treat wildlife friends. They are also living beings. Be careful,” he wrote.

Since being posted, the clip has received more than 73,000 views. Many were appalled seeing the leopard being treated this way by the man and expressed their dismay.

“Animals have started wearing T-Shirts,” a person wrote, referring to the man holding the leopard’s tail in the video.

An user suspected that the leopard must have been injured. “And, I am damn sure, the leopard might be old or injured or else the situation would have been totally different,” he wrote.

The one holding the hind legs of the leopard.

And I am damn sure, the leopard might be old or injured or else situation would have been totally different.

Some appealed that animals should not be treated this way.

Let’s not insult Animals. These humans should be charged

Many were of the opinion that the men seen in the video must be punished.

It’s very sorry to see these kind of conduct by people .They must be punished as per the law .

“Please tell me that the poor soul is in good condition,” wrote an user while showing concern for the leopard.