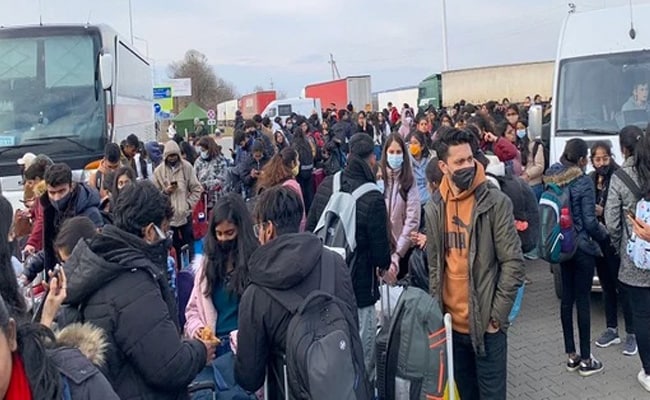 The students were asked to carry their passport, sufficient cash, good and proper clothing

As Russian forces continued their advance in Ukraine, shelling cities, India urged all its citizens to leave Ukraine capital Kyiv “urgently today, by trains or any other means available”.

“All Indian nationals including students are advised to leave Kyiv urgently today. Preferably by available trains or through any other means available,” the Indian Embassy in Ukraine tweeted.

Advisory to Indians in Kyiv

All Indian nationals including students are advised to leave Kyiv urgently today. Preferably by available trains or through any other means available.

The advisory was posted hours after satellite images emerged showing a long convoy of Russian military vehicles on roadways northwest of Kyiv. Hundreds of tanks, towed artillery, armored and logistical vehicles can be seen in the images released by a US-based space technology company.

Around 16,000 Indian students are still stranded in Ukraine. Many students have shared photos and videos on social media from underground bunkers, metro stations and bomb shelters, where they have been hiding since the Russian attack started last Thursday. Around 8,000 Indian nationals have left till now, the foreign ministry said on Monday.

Several Indian students remain stuck in eastern parts of Ukraine, which is most affected by the Russian military offensive, and they are finding it difficult to travel by road to reach the western borders. Students have also been walking to the borders in sub-zero conditions, hoping to cross over and take a flight home.

Yesterday, the embassy had asked students to go to the railway station in Kyiv, where special evacuation trains have been arranged by Ukraine to take people to the western region. The students were asked to carry their passport, enough cash and proper warm clothing.

“We sincerely request all Indian nationals/students to remain calm, peaceful and united. A large crowd can be expected at the railway stations, therefore, it is advised that all Indian students remain patient, composed and especially not to exhibit aggressive behaviour while at the railway station,” the advisory said, warning students of train delays or cancellations, and long queues.

Indian students are being moved to Hungary, Poland, Romania, Slovak Republic – all nations which share border with Ukraine – before they are brought back to India under Operation Ganga.

Russia started military operations against Ukraine on Thursday morning after months of tension over the former Soviet republic’s proximity to NATO.