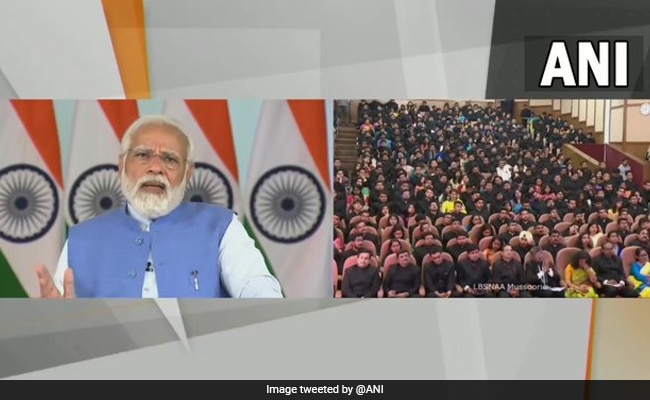 Prime Minister Narendra Modi said that the whole world is looking at India.

Prime Minister Narendra Modi on Thursday said that India needs to develop at a faster pace to find its role while the new world order shapes up in the backdrop of the COVID-19 pandemic.

The Prime Minister said that the whole world is looking at India. “In the circumstances created by COVID-19, new world order is emerging. In this new order, India has to develop itself at a faster pace,” he added.

He said that the current batch of civil servants will play a big role in the development of the country in the next 25 years.

“Over the years, I have spoken to and spent a long time with various batches of Civil Servants. But this batch is very special. You are starting your work in the 75th year of India’s Independence. In this Amrit Kaal, you will play a big role in the development of the country in the next 25 years,” said PM Modi.

He further urged the civil servants to keep the goals of building an Aatmanirbhar Bharat and laying the foundation of ‘New, Modern India’ at the top of their priorities.

“You always have to keep the goals of 21st century India in mind. The goal of building an Aatmanirbhar Bharat, the goal of laying the foundation of New, Modern India,” said PM Modi.

The Prime Minister also stated that the inauguration of the new sports complex and revamped Happy Valley Complex will give a new direction to the Academy.

The Prime Minister inaugurated the new sports complex and dedicated the revamped ‘Happy Valley Complex’ to the nation.

Based on the principle of ‘Mission Karmyogi’, with new pedagogy and design, the 96th Foundation Course at LBSNAA comprises 488 (Officer-trainees) OTs from 16 services and three Royal Bhutan Services (Administrative, Police, and Forest).

The new pedagogy based on the principles of ‘Mission Karmayogi’ was designed to harness the adventurous and innovative spirit of the youthful batch, the Prime Minister’s Office (PMO) said in an official statement.

As per the PMO, the 96th Foundation Course is the first Common Foundation Course at LBSNAA based on the principle of ‘Mission Karmyogi’, with new pedagogy and design. Emphasis was put on transforming the Officer Trainee from a student/civilian into a public servant through initiatives like interaction with the Padma Awardees in the spirit of ‘Sabka Prayas’. All 488 Officer Trainees were given first-level training in Krav Maga and various other sports.