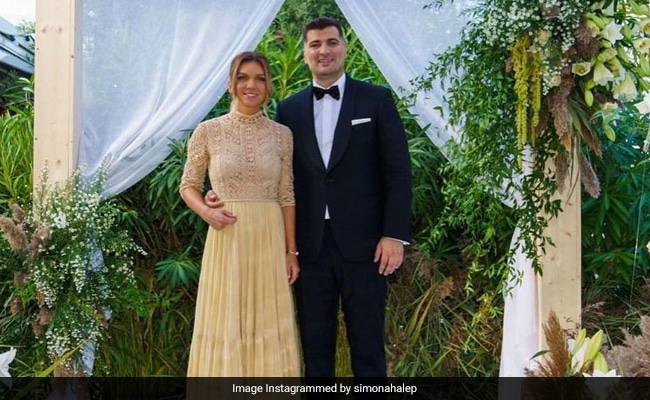 Romanian tennis player and former world no. 1 Simona Halep has grabbed eyeballs once again. But this time, it isn’t for her performance on the tennis court but thanks to a personal milestone. The tennis star recently got married to her boyfriend Toni Iuruc and the glimpses from their wedding have captivated the Internet. The wedding ceremony and the subsequent party took place on Wednesday in Constanta, Romania. Ms Halep released the wedding photos on social media much to the delight of her fans. We are given many glimpses of the happy couple in the pictures. In some photos, they are seen in a formal pose on the stage while in the others, they are smiling, kissing and dancing with each other.

The photos also show them officially signing their marriage records in the presence of their parents. Ms Halep is dressed in a gorgeous embroidered beige gown for the ceremony while Mr Iuruc is seen in a three-piece suit with a black bow tie. At an after-party,  the two danced together as well.

Here are the photos we are gushing about:

Social media posts revealed the beautiful locale and decor at the ceremony. The couple went for serene white decor that was complemented by shades of green, beige and golden in the snaps. Plants and flowers made an appearance on the tables, below the ceilings, near the stage and on the sides of the aisle. White curtains and coir ceilings were used to a raw charm to the site.

We also noticed huge golden chandelier-like structures hanging from the ceiling in a seating area. A bunch of white roses hang over the dining tables that are arranged for the guests. Could this get any prettier? We think not.

Fans also took the opportunity to congratulate the tennis star and wished Simona Halep all the luck for the new journey ahead.