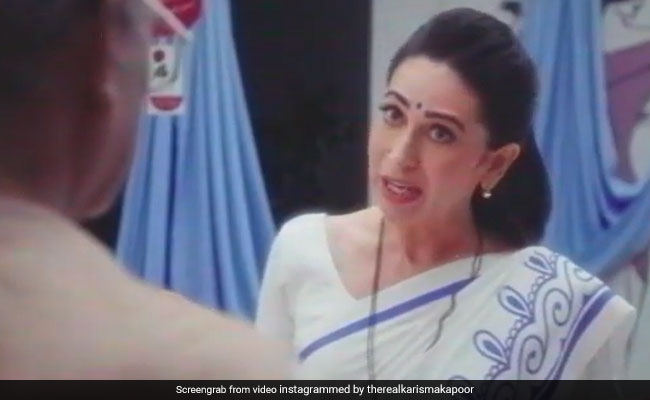 Bollywood actor Karishma Kapoor took fans on a nostalgia trip as she appeared in an ad, which is a recreation of a classic TV ad from the 90s. The ad, made for credit card management platform Cred, recreates the famous Nirma Super Detergent ad from the 90s.

Karishma Kapoor uses similar lines and mannerisms as the original Nirma ad. The actor shared the video on her official Instagram account.

The video starts with Ms Kapoor, dressed in a white saree, entering a shop where the shopkeeper greets her and hands over her stuff. The actor then asks for a ‘charger’ kept behind the shopkeeper.

The shopkeeper, amazed, says “Aap toh hamesha regular charger lete the (You used to always buy the regular charger)”. In her reply, Karishma Kapoor says “Leti thi (used to take)”. She goes on to add how she changed her mind as Cred Bounty is offering iPhones.

The original Nirma ad, which came out in 1989, featured actor Dipika Chikhlia. Ms Chikhlia is best known for playing Sita in Ramanand Sagar’s Ramayan. The ad is known for the punchline ‘Maan gaye aapki paarkhi nazar (I am in awe of your sharp eye),’

Cred has earlier featured Neeraj Chopra and Rahul Dravid in ads that had gone massively viral on social media. Mr Dravid, a mild-mannered cricketer, played the role of “Indiranagar ka Gunda”, a man who loses his cool in Bangalore traffic.

Neeraj Chopra, who won a gold medal at the 2022 Tokyo Olympics, was part of a Cred ad that took a dig at the media frenzy around his achievement. The athlete plays the roles of a journalist, a cashier, a marketing executive, a filmmaker and an aspiring javelin thrower with equal elan.