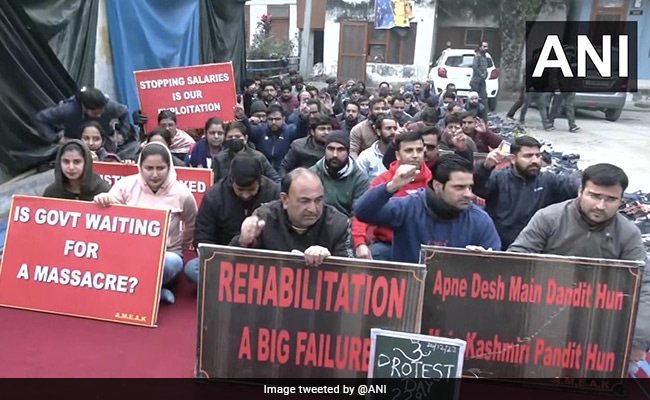 The protesting employees have sought interim relief from being forced to join work. (File)

Protesting Kashmiri Pandit employees have approached the Central Administrative Tribunal against a Jammu and Kashmir administration order stating those granted employment under the Prime Minister’s special package cannot be transferred.

The move to approach the CAT’s Srinagar bench comes days after Jammu and Kashmir Lieutenant Governor Manoj Sinha announced that the striking employees would not be given salaries, a statement criticised by all major political parties.

Kashmiri Pandit employees have been on a strike for over seven months to demand their “relocation” from the Valley in view of targeted killings by terrorists.

The protesting employees have also sought interim relief from being forced to join work at their respective postings till the government provides them a secure work environment and releases their pending salaries.

The petition filed by Boopinder Bhat and Yogesh Pandita is likely to be listed for hearing after the tribunal resumes functioning on December 30.

They have challenged sub-rule 4 of rule 4 of the Jammu and Kashmir Kashmiri Migrants (Special Drive) Recruitment Rules, 2009, which provides that “in case the appointee migrates from valley again for any reason whatsoever, he shall lose the job without any notice and shall stand terminated”.

The application filed by the protesting employees read, “The targeted killings make it crystal clear that the respondents (JK administration) have failed to provide a secure environment to Kashmiri Pandit employees at their respective place of posting but the said rule is jeopardising the life and safety of the Kashmiri Pandit employees which is clearly violative of the right to life provided under Article 21 of the Constitution of India and as such deserves to be set aside along with the related stipulations in the form/agreement.”

They have also demanded the quashing of sub-rule 6 of rule 6 the Jammu and Kashmir Kashmiri Migrants (Special Drive) Recruitment Rules, 2009, which provides that “the appointee under these rules shall have to work within Kashmir and shall not be eligible for transfer outside the valley under any circumstances.”

The applicants have called for the passing of directions to stop the administration from taking any adverse action against migrant employees who are not able to join their duties owing to the threat to their lives and well-being.

Around 3,000 Kashmiri Pandit employees have been sitting in protest over the killing of Rahul Bhat, who was gunned down by terrorists inside the tehsil office in Chadoora town in Budgam district of central Kashmir on May 12 this year.

Mr Sinha’s recent remark that reserved category (Dogra) employees cannot be transferred to Jammu and those (KP employees) sitting at home will not get salaries drew sharp reactions from the political parties of the Union territory.

All major parties in Jammu and Kashmir, including the BJP, came out openly in the support of Kashmiri Pandit and Dogra employees and backed their demands for their “relocation” from Kashmir in view of the targeted killings by terrorists and a transfer policy.

Union Minister of State in Prime Minister’s Office Jitendra Singh had on Saturday said, “My personal opinion is that nothing can be more valuable than a human life…If there is a threat even to one life, it is better to save that life even if it means closing down a dozen offices.”