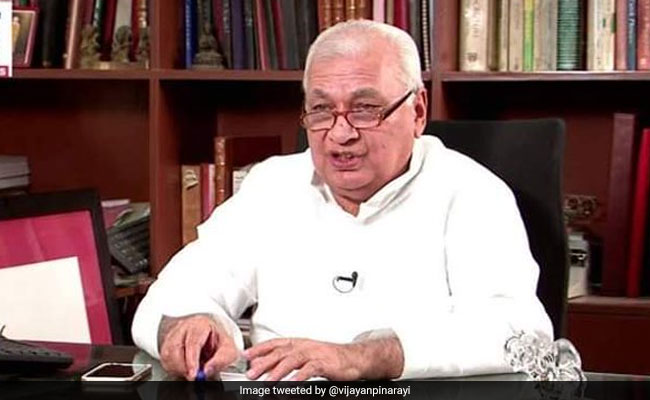 Preventive vaccine against COVID-19 will be provided free of cost to all, Arif Mohammad Khan said (File)

Pinarayi Vijayan’s government in Kerala today promised to raise farmers’ income by 50 per cent in the next five years and ensure there are no landless people in Kerala even as it admitted that the COVID-19 pandemic would cost the state economy dearly.

All welfare and development initiatives and mammoth infrastructure projects, launched by the previous government including the flagship K-FON programme to provide free high-speed internet to the poor, will be completed in a time-bound manner despite financial constraints, it said.

The priorities of the state’s second consecutive Left government were presented by Governor Arif Mohammed Khan in his policy address at the state Assembly.

Detailing the impact of the pandemic on the state’s finances, he said it is estimated that Gross State Domestic Product (GSDP) will decline by about 3.82 per cent in 2021.

“We expected a sharp recovery in the economic growth to 6.60 per cent in 2021-22. But the second wave of the COVID-19 pandemic can be an impediment to this expectation,” Mr Khan said.

Though a sharp rise of 37.87 per cent growth was expected in revenue receipts in 2021-22, the consequences of lockdown necessitated by a surge in COVID-19 cases, is likely to constrain this, he said, adding that higher revenue as well as fiscal deficit were on cards.

A counter-cyclical fiscal policy to stimulate the economy has been initiated lest the economic slowdown should become steeper, he said.

In the address, the Governor recalled the comprehensive Rs 20,000 crore relief package implemented by the previous government during the first wave of the pandemic.

In the current second wave, the state government has already announced Rs 1,000 as compensation to all the 14.7 lakh families below poverty line (BPL) who are not in receipt of any other welfare pensions.

Preventive vaccine against COVID-19 will be provided free of cost to all, as it is essential for building herd immunity against the pandemic, he said.

The additional cost to the State exchequer for free vaccines would be at least Rs 1,000 crore, he said, adding that the government has floated a global tender for the procurement of three crore doses of COVID-19 vaccines as well as by placing orders with domestic manufacturers for one crore doses.

Lavishing praise on the state’s fight against the pandemic, he said the strength and ability of Kerala’s healthcare systems to withstand the unprecedented challenge posed by the coronavirus pandemic are derived from the decentralised people-centric systems-building approach.

Outlining the fresh priorities of the new government, the Governor said it is committed to raise farmers’ incomes by 50 per cent in the next five years.

The government will ensure that there are be “no landless people in Kerala”, he said adding that “pattayam” (a deed of lease) will be issued to all the entitled landless people during its present tenure.

The “Sabarimala Idathavalam” project will be implemented with the assistance of Kerala Infrastructure Investment Fund Board (KIIFB) to provide better facilities for Sabarimala pilgrims to meet their primary requirements of rest and comfort.

Electronic file processing system will be implemented in all the government establishments to ensure timely action and more transparency, he said.

Cooperative society for young entrepreneurs, online cultural festivals, formation of the Centre of Excellence for Data Analytics and Artificial Intelligence, more employability centres, construction of 4,000 new houses under Phase II and III of the LIEF Mission programme were some of the fresh promises.

The Governor, in his two hour-long speech, criticised the Centre over the raising of the annual borrowing limits of the state.

He also said the recent policies of the Central government have been retrogressive as far as the co-operative sector is concerned.

The Congress said though a fresh health and education policy was expected in the address, it failed to figure in it.

The address also did not have any reference to the preparedness of the state to deal with the third wave of the pandemic, it said.

The BJP alleged that the present policy address by Arif Mohammed Khan was just a repetition of the previous one.