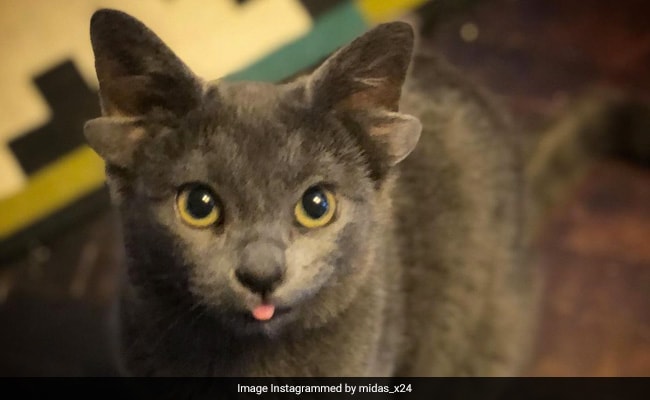 Midas is a kitten that was born with four ears.

A kitten born with four ears has found its forever home, and news of its adoption has gone viral on social media. Midas, the four-month-old cat, is a Russian blue mix and was adopted by a woman in Turkey.

Midas the four-eared kitten has found viral fame on Instagram. In photos shared on its Instagram account, we notice an additional pair of small ears inside its primary ears. The deformation is possibly caused by a recessive gene mutation carried over from its parents, a report by LAD Bible said.

According to Daily Mail, the kitten was adopted by a woman named Canis Dosemeci and her partner. The woman was already a pet parent before she brought Midas home. On Midas’ Instagram page, we often see an adorable dog named Suzy playing with the newcomer. To our delight, the two pets seem to be happy around each other. In this post, we see Midas giving a goodnight peck to 12-year-old Suzy.

Midas’ four ears aren’t the only unique features on her body. The cat also has an adorable white heart-shaped mark on its belly. Here’s a video where we see the mark as its owner gives it a good belly rub.

Ms Dosemeci said that the kitten’s four ears do not impact its hearing. “She is a very playful cat. But very friendly as well,” she said. “She sleeps all day and is awake all night.”

Awareness about cats and giving them a safe space to live isn’t a foreign idea. People in India have also started taking steps. A Kutch-based man established a Cat Garden in 2017. Four years down the line, the space houses over 200 cats. The founder of this cat house dedicated it to his late sister. Currently, the owner and his wife bear 90 per cent of expenses, amounting to ₹1.5 lakhs per month, for the maintenance of the cat house.