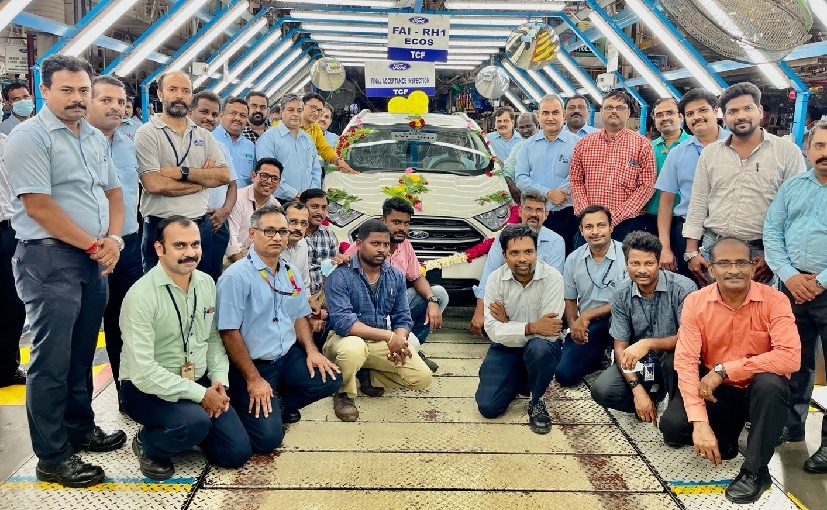 It’s the end of an era as Ford India rolled out the last locally made Ecosport subcompact SUV from its Tamil Nadu plant earlier this week. Ford’s Maraimalai Nagar facility built the EcoSport not only for India but the world as well, and the last units will be exported from the country. This marks the end of Ford’s operations in India with the American giant pulling out of the market in September last year. While retail operations ceased in 2021, the last of the export orders were completed only now.

Ford operated out of two plants in India. The Maraimalai Nagar facility and the Sanand facility in Gujarat. The latter produced the Aspire and Figo cars for domestic and export markets. This plant was the first to shut shop and will now be taken over by Tata Motors as the Indian automaker ramps up its electric aspirations. Meanwhile, the Tamil Nadu was Ford’s oldest and made a host of cars before the EcoSport came to life in 2013. The model turned out to be a massive hit jumpstarting the subcompact SUV segment and was the brand’s bestseller for the longest time. The made in India export also made it to several markets including the US. The last of the export units though were made amidst labour unrest at the plant.

In a life span of eight years, the EcoSport remained a strong seller and received multiple updates along the way. It’s most popularly was sold with the 1.5-litre diesel engine, while other options included the 1.5-litre petrol and the erstwhile 1.0-litre turbocharged EcoBoost petrol motor. The last update arrived in 2021 when Ford brought a new trim without the tailgate mounted spare wheel. Sadly, this marks the end of the EcoSport, a car that several of the new-age subcompact SUVs owe their success to.