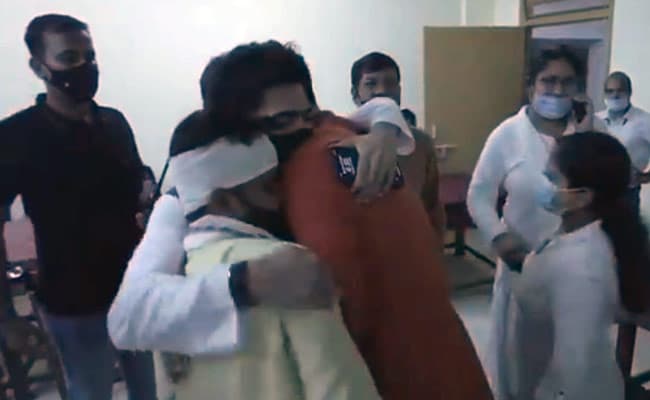 Abhishek Banerjee ended the dharna when the detained Trinamool members were released.

Bail granted to all @AITCofficial workers who were arrested in Tripura. Satyameva Jayate!

I’ll be taking them to Kolkata as they have sustained severe injuries & were denied medical attention.@BjpBiplab you can keep trying but all your resources will fall short! MARK MY WORDS. pic.twitter.com/ZBNLMzAK5x

Targeting the Biplab Kumar Deb government in the state, the Trinamool national general secretary said, “Instead of the rule of law, the law of the ruler is in place in Tripura.”

Throwing a challenge to Mr Deb, he said “No matter what may have transpired, your days now are numbered.”

Interestingly, Mr Banerjee used the words that a panel of the National Human Rights Commission (NHRC) had used to describe the situation in West Bengal due to the political violence after the Assembly polls earlier this year.

The NHRC panel formed on the directions of the Calcutta High Court had said the situation in Bengal was a “manifestation of law of ruler instead of rule of law”.

A group of Trinamool leaders was allegedly attacked Saturday while they were travelling from Agartala to Dharmanagar in north Tripura. The party’s members have alleged that BJP workers armed with batons and other weapons attacked them at various points of their journey on NH-8.

Thereafter, supporters of the BJP and Trinamool staged blockades 500 m apart on NH 8 and police had to fire teargas shells to disperse the protesters.

Chief Minister Deb launched a veiled attack on Trinamool on Twitter, saying that a “section with political motives is trying to hatch a conspiracy to stall the pace of development in the state”. “But the citizens of Tripura will not allow any conspiracy to be successful in this land of Maa Tripureswari,” he tweeted in Bengali. He said the politically-aware people of Tripura had given responsibility to this “development-oriented” government in 2018 and this development cannot be stopped by any “conspiracy”.

Emboldened by its victory in the Bengal elections, the Trinamool has set eyes on Assam and Tripura which have significant Bengali populations. This is, however, not the first attempt by the party to make inroads in Tripura. Ahead of the 2013 elections, several people joined the party in Tripura and by 2016, the state unit had prominent names such as former Congress MLA Sudip Roy Barman. However, most of them joined the BJP ahead of the 2018 state polls.

Sources in the Trinamool said the party will stage a protest over the alleged attack on its members at Parliament Monday.