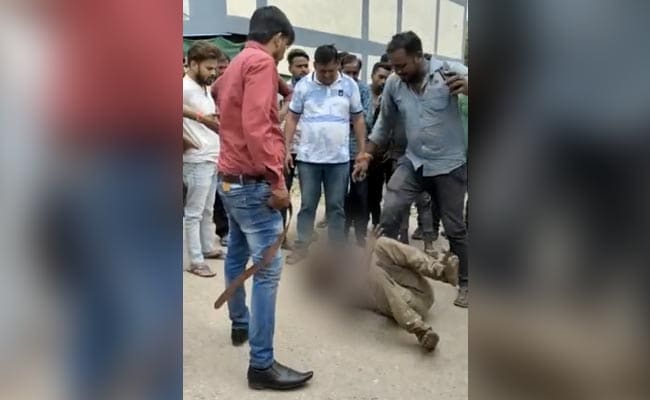 Yet another barbaric assault has been reported from Madhya Pradesh – two days after a tribal man was tied to a truck and dragged on the road in Neemuch district on suspicion of being a thief.

This time a man – Mohammad Asad Khan – was brutally attacked in Rewa district by those who accused him of stealing bus batteries.

A disturbing video of the savage incident, which took place on Saturday and in full view of the public, shows one of the accused whipping Asad with a belt. At one point a man stands on Asad’s chest and another kicks him in the groin.

The police believe four people were involved. Two – Danish and Kuldip – have been arrested and been charged with attempt to murder. The police are on the lookout for the other two.

Mohd Asad was assaulted brutally in Rewa by those who accused him of stealing bus batteries, main accused Danish and Kuldip arrested @ndtv@ndtvindiapic.twitter.com/DqSx5rHS0Z

The case has been filed at the city’s Civil Line Police Station in Transport Nagar.

This shocking incident is the latest in a wave of violent attacks.

On Thursday a 45-year-old man was tied to pick-up truck and dragged on a concrete road in Neemuch by men who suspected him of thievery.

They physically assaulted him before he was dragged to his death.

A video of the incident, which took place at Jetiya village, was widely circulated on social media.

“Eight people have been identified. Five among them have been arrested, the rest will be arrested soon. The viral video helped identify the culprits,” Superintendent of Police Sooraj Verma said.

A day before the Neemuch tragedy, Tasleem Ali, a 25-year-old bangle seller from Indore, was the victim of a brutal mob attack on Sunday that was caught on camera.

24 hours later, though, Tasleem was the accused; he was charged with molesting a 13-year-old.

The FIR accessed by NDTV, however, raises serious questions about the role of the police and administration. There are also questions over a delay in registering Tasleem’s original complaint.

Police have arrested the accused; RK Raj, a sub-divisional police officer from Mahidpur, said: “The police will take a tough stand so a message goes out… such incidents will not be tolerated.”