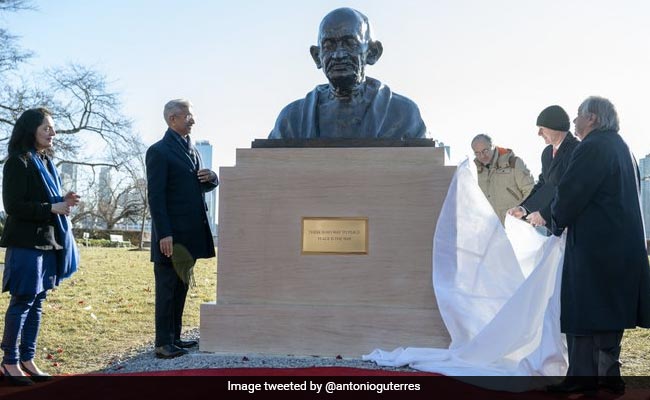 The Mahatma Gandhi statue installed at UN headquarters is a gift by India.

United Nations Secretary-General Antonio Guterres called Mahatma Gandhi an “uncompromising advocate for peaceful co-existence” and said that Gandhi’s bust at the organisation would serve as a reminder of the values he upheld.

The new installation located at @UN Headquarters will serve as a reminder of the values Gandhi upheld, and to which we must remain committed. pic.twitter.com/CIFlQvPmGI

“Mahatma Gandhi was an uncompromising advocate for peaceful co-existence, non-discrimination and pluralism. The new installation located at @UN Headquarters will serve as a reminder of the values Gandhi upheld, and to which we must remain committed,” tweeted Guterres.

On Wednesday, Foreign Minister S Jaishankar unveiled the statue of Mahatma Gandhi at the United Nations Headquarters in New York.

Guterres and the President of the 77th UN General Assembly Csaba Korosi and India’s Permanent Representative Ambassador Ruchira Kamboj joined the EAM on the occasion and paid floral tributes at the bust of Mahatma Gandhi, said the Permanent Mission of India to the UN in a press release.

Mahatma Gandhi’s favourite bhajan ‘Vaishnav jan to’ was recited at the event.

The bust of Mahatma Gandhi, a gift by India, will be the first sculpture of Gandhi to be permanently located at the North Lawn Gardens of the United Nations.

The sculptor of the bust is Ram Vanji Sutar, who made the Statue of Unity, the world’s tallest statue standing at a height of 182 meters near Kevadia in Gujarat

The event was also attended by the high-level representatives of the United Nations Security Council members, including incoming members and senior UN officials, added the release.

Mr Jaishankar is in New York to Chair the United Nations Security Council meetings on 14-15 December 2022.

India is holding the presidency of the United Nations Security Council for December 2022.

During his visit, Mr Jaishankar is scheduled to preside over two High-Level Ministerial signature events of India’s ongoing presidency. The Foreign ministry, in a press release, stated that the High-Level Ministerial Open Debate on December 14 is on the theme of “New Orientation for Reformed Multilateralism” [NORMS].”

The High-Level Briefing on December 15 is on ‘Global Approach to Counter Terrorism – Challenges and Way Forward.’ Both these themes have been key priorities for India during its current tenure at the UN Security Council.

The primary focus of the Open Debate on Reformed Multilateralism is to encourage all member states to seriously address the need for reforms in the global governance multilateral architecture, including the long-standing reforms of the UN Security Council.

Furthermore, the high-level briefing on counterterrorism will seek to promote consensus among the Council Members on the principles of a global counter-terror architecture and aim to further work upon the Delhi Declaration adopted during the Special Meeting of the Counter-Terrorism Committee held in Mumbai and New Delhi in October.

Mr Jaishankar will also launch a “Group of Friends for Accountability for Crimes against Peacekeepers” and is expected to hold meetings with Guterres. A special photo exhibition demonstrating India’s initiative on “International Year of Millets 2023” and a millets-based luncheon will also be hosted by Mr Jaishankar for the UN Secretary-General and UNSC member states.