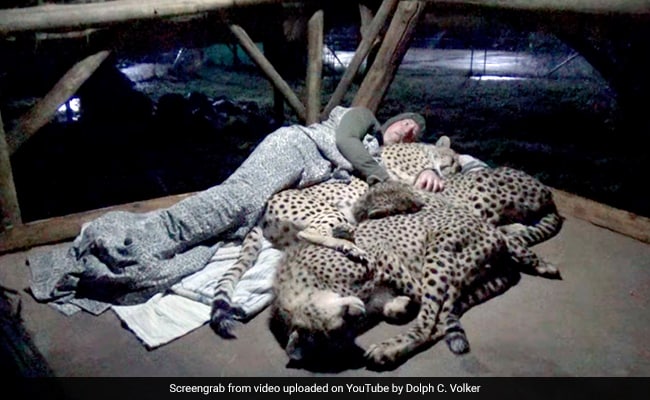 A man sleeping with three cheetahs at night.

You may have probably seen someone sleeping with cats and dogs but have you ever seen a human being sleeping with cheetahs? If not, then this story is a must read for you.

A video is going viral on social media which shows a man sleeping with three cheetahs at night. Originally posted on YouTube by Dolph C Volker in January 2019, it is again gaining attraction.

He said in the caption of the video, “I love when I know the answer to a question before it’s asked. Do cheetahs prefer cold concrete or warm blankets and company?”

According to Mr Vokler’s Facebook profile, he is an animal advocate with a Zoology degree and is fascinated by animal behaviour, studying all his life and even planning a cheetah conservation project.

“All are quite tame as they are groomed for the breeding program so when they have cubs, they can be monitored closely. An accepting and approachable mother allows that. There is a plan to release one of these cheetahs into a protected wild in the near future,” he says in the video.

According to Mr. Volker, he was granted special permission to spend his nights with the three cheetahs because he had watched them grow up and built a relationship with them during past volunteering.

“I think it is really cool these cheetahs trust and like me enough to share their most vulnerable time at night to snuggle, purr, and share their warmth and sleep with me. It is an extraordinarily rewarding feeling,” he added.

The video has been received 17 million views and over three lakh likes on YouTube. Netizens felt surprised and posted heartfelt comments.
“I wanna cuddle with them too,” a user commented.

“This man is living my wildest dream,” a third user commented.
Females and their pups and lone males make up the cheetah’s social groups. Males are more stationary than females, and may instead create considerably smaller territories in locations with abundant prey and access to females. The cheetah is most active throughout the day, with peak activity between dawn and sunset.