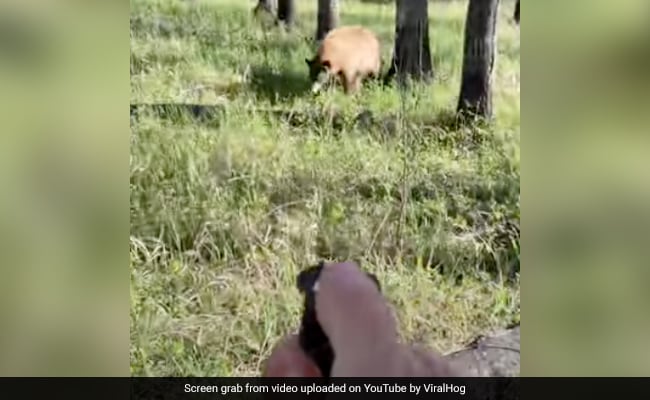 A man spots bear while clicking pictures at Waskesiu Lake, in Saskatchewan, Canada.

A video is going viral on social media, which shows a man escaping a bear that spotted him in a forest. According to the description text of the video, the incident took place in Canada when the man was clicking photos.

Curtis Matwishyn recorded the terrifying encounter on camera from where he escaped using a bear spray. The man used the spray so that the animal can’t come closer to him.

The video has been shared by ViralHog on YouTube. The incident took place on June 1 at Waskesiu Lake, in Saskatchewan, according to the post.

“I was out photographing a bear from a safe distance when it caught scent and sight of me. Normally, I’m used to black bears running away when they’re aware of a person but this bear was behaving oddly. It came towards me and followed me even after I stood my ground, shouted, and waved my arms at it. Luckily I had bear spray and prepared myself to use it if the bear charged at me,” said the man, according to the description of the video.

“I slowly and safely started retreating back to my car and after a couple of minutes of it following me, I decided to start filming. The bear continued to follow me and was getting closer. When I was in a good position with the wind at my back and the bear coming close to me, I sprayed it with the bear spray. Thankfully the bear spray worked as designed and sent the bear running away,” he further said.

The way he handled the situation while recording a video has been praised by users in the comment section.

While another said, “This was a perfect execution of a bear encounter avoidance. This bear was likely a juvenile who was curious, or looking to practice territorial dominance.”