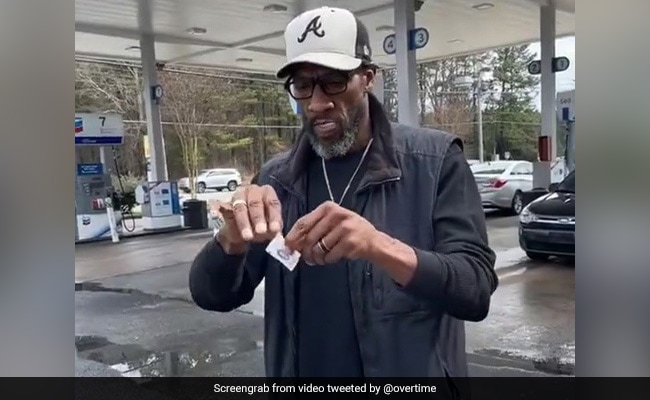 A man has stunned the Internet with his magic trick.

A man’s ‘magic trick’ with a sachet of sugar has left viewers completely baffled. Footage that has gone massively viral online shows the man standing at what appears to be a petrol pump. He rips open the sachet and pours the sugar into his left hand, which has been clenched into a fist. Holding the empty sachet in his mouth, he throws the sugar into the air. Then, in a move that puzzled millions, the man seems to ‘catch’ the sugar in his right hand. The video shows him pouring the sugar back into the sachet to complete his trick.

According to Ladbible, the video was first shared on TikTok by user @jadon.ray, where it blew up with more than 6.5 million views. On Twitter, the video has been watched a whopping 5.4 million times. Watch it below and see if you can figure out the trick that has stumped millions:

Many viewers expressed this confusion at the magic trick, while others claimed to have cracked the mystery.

“Only thing I can think of is someone off camera handing him something,” wrote one person in the comments section.

Only thing I can think of is someone off camera handing him something ????, you should never assume someone isn’t helping during slight of hand. Dude’s good, watched many times following each hand, this is the only time it appears out of site. pic.twitter.com/5juRfzkTS3

“I’m married to a professional magician and I have to say, this is exceptional. Wow,” said another.

I’m married to a professional magician and I have to say, this is exceptional. Wow. https://t.co/cQhcIgDk7k

The general consensus, however, was that the man was aided in his trick by a fake thumb in which he hid sugar.

That thumb looks like he bought it at the gas station… pic.twitter.com/h2jcvqVWys

The fake thumb is traded from one hand to another to fill sugar. pic.twitter.com/UMorvskTLe

Here is has that fake thumb tip in the hand that he pours the sugar into. So the fake thumb captures most of the sugar.

Then he quickly slides that fake thumb, full of sugar, onto his right hand. pic.twitter.com/yQVKJXbHFm

What do you think of this trick? Let us know using the comments section.