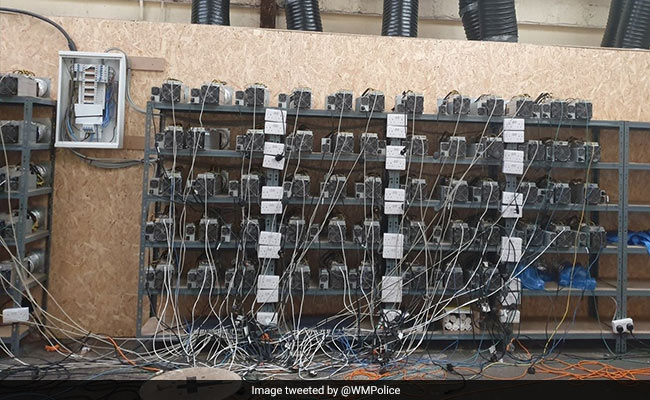 The site housed around 100 computers and had bypassed electricity meters.

Drugs police in central England spotted the tell-tale signs of a cannabis farm: visitors at all hours, extensive wiring, ventilation ducts and unusual amounts of heat being generated.

But on closer inspection, they exposed another operation reliant on massive power usage: a cryptocurrency mine that was stealing electricity from the national grid.

A raid by West Midlands Police uncovered the illicit operation at an industrial estate northwest of Birmingham, Britain’s second city.

#CountyLines | During the week we executed a drugs warrant at a premises on a #Sandwell industrial unit – and uncovered a #cryptocurrency mine.

⚡️ The set-up was stealing thousands of pounds worth of electricity from the mains supply.

“It’s certainly not what we were expecting,” Sergeant Jennifer Griffin said Friday.

“It had all the hallmarks of a cannabis cultivation set-up and I believe it’s only the second such crypto mine we’ve encountered in the West Midlands.”

Police believed this operation was mining bitcoin, she added.

The site housed around 100 computers and had bypassed electricity meters. It was empty at the time and no arrests were made, but police said they were investigating the unit’s owner.

Bitcoin mining alone uses the same amount of electricity a year as Switzerland does, according to Deutsche Bank analysts.

Iran’s President Hassan Rouhani on Wednesday announced a four-month ban on all cryptocurrency mining, after his energy minister apologised for unplanned power cuts in major cities blamed on unlicensed miners.