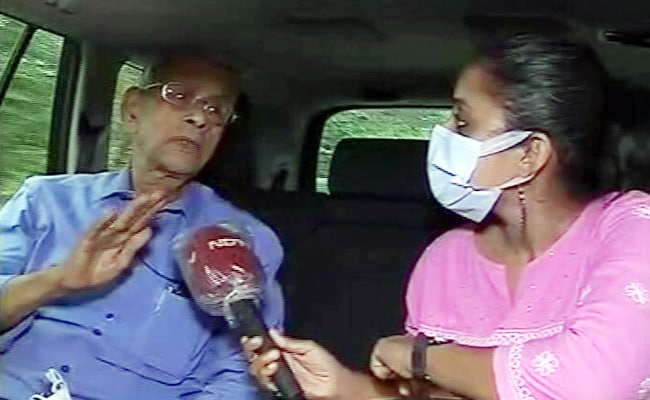 E Sreedharan says,”If you feel I can make a change, vote for me.”

Even though the party has just one legislator in the entire state but the BJP’s outlook in next month’s elections has become a keenly-watched subject all thanks to the entrance of a disruptor – 88-year-old technocrat E Sreedharan, dubbed “Metro Man” for his work on high-profile infrastructure and mass transit projects like the Delhi Metro.

Mr Sreedharan spoke to NDTV about his motivation for entering politics, his views about the BJP and Prime Minister Narendra Modi, the Sabarimala Temple controversy, and more.

Here are excerpts from the interview:

NDTV: At 88, you say you could see no other political option and you wanted to clean the mess. What’s on your mind? With the position you have chosen, the party you have chosen, is this possible?

E Sreedharan: Yes, in 5 years this is possible. When I joined Cochin Shipyard, in 2 months I changed the work culture. And attitude of people. In two months’ time. It is possible here also. Why not?

NDTV: What are you looking at? Win for yourself? Win for BJP as a government? BJP in Kerala has only 1 MLA as of now.

E Sreedharan: That is true. That is how any organization starts. Isn’t it? You have seen in Tripura. There was no MLA at all. How did they capture power? In Delhi, see AAP. They did not have any base there? They captured power in second election itself. It is possible. Now is the best time for BJP really. Because people are fed up with the two fronts. LDF and UDF. I have very great hopes that BJP will be able to form the government this time.

NDTV: If you look at national politics, even in Kerala, BJP is raising a lot of issues like ‘love jihad’, claiming that a lot is happening in Kerala too. Do you agree with this?

E Sreedharan: I will not like to enter that particular subject, because it is a controversial subject. I am only looking at doing things in a straightforward and transparent manner. Keeping everyone on our side. You cannot antagonise one section of people. You cannot isolate them from the mainstream. Everybody has to be together to take the country forward.

NDTV: But ideologically, do you see eye-to-eye with BJP on everything, including what you refer to as controversial issues?

E Sreedharan: I may not agree entirely. Buy you must see the overall situation. Unless we have a party like BJP here, this state will be gone.

NDTV: So what are you offering Palakkad?

E Sreedharan: I am offering to make Palakkad the best constituency in two years’ time.

NDTV: What do you mean by that?

E Sreedharan: I am talking about basic facilities. We don’t even have a solid waste management system here. That takes only six months to be done. Water supply problems. We have to solve it quickly. Cleanliness of this city is only a two-months’ job. I can change the face of the city in no time.

NDTV: You are a national figure. Do you see India today more polarised, communalised than when you were growing?

E Sreedharan: Not at all. This theory is by people who don’t like Modi government. But majority of people have accepted Modi. See the progress. People who are opposed to him find our small, small errors here and there. This is not fair. If Modi was not PM, J&K would have gone away by this time.

NDTV: So you agree with what has happened? Internet was cut off for days. They didn’t have any form of communication.

E Sreedharan: This is just one little small sacrifice one has to do for the sake of the country. Don’t make a small little thing into a mountain. This is unfair. This is what unfortunately our media is doing. And media is all being purchased by opposite parties. Please don’t ask me such questions.

NDTV: It’s so hot here. You for sure are not sweating it out, campaigning through the day. You are taking your own sweet time. Two hours in the evening, two in the morning.

E Sreedharan: I have got the foot soldiers working for me. Every person in this constituency will be met personally. I am writing a personal appeal for all that will touch their heart. It’s in written form. Everyone will get it in a week’s time. If you feel I can make a change, vote for me. If not, don’t vote for me. I am not bothered. It is for you.

NDTV: Court allowed women of all ages to enter Sabarimala. There were protests, much of it was political. Now opposition, BJP and Congress already has said they will not allow women in menstruating years to enter Sabarimala. Left government has said let the verdict come, it will be discussed with all stakeholders. How do you see this?

NDTV: Government has said they were not the ones who took these women.

NDTV: But here the court had said women of all ages can go.

E Sreedharan: Yes, but there was an appeal against it. Instead of government standing with the people, government is opposing the people straight away. Tried to trample them down. No one will take this.

NDTV: But if the court says – allow all women.

E Sreedharan: Even if court says that I am sure people will still continue to observe and respect the sentiments of people. I am sure about that. But government must not sabotage it with police help.