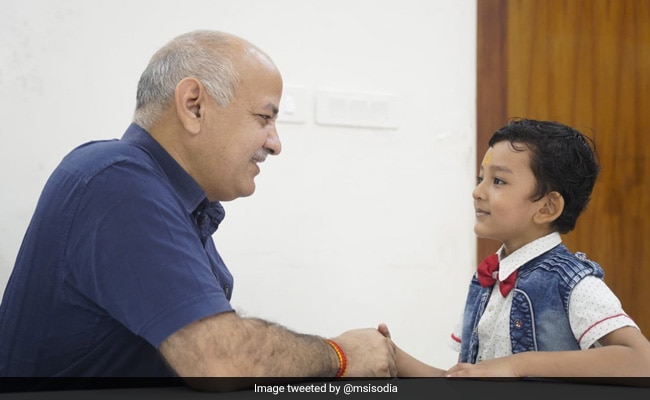 Delhi Deputy Chief Minister Manish Sisodia has a “new friend” who is fluent in three different languages – no mean feat for someone who is just five-years-old. At the age of five, Hiten Kaushik can speak French, English and Sanskrit with equal ease, impressing not just Mr Sisodia but thousands of social media users. The deputy chief minister of Delhi shared two photos with the prodigy on his Twitter profile this Thursday. “Today, I made a new little friend. At the age of five, he is fluent in three different languages: French, Sanskrit, and English,” he wrote.

“It was really nice to meet you, Hiten,” Mr Sisodia added.

The photos show him interacting with the five-year-old, who dressed up for the meeting in a blue jacket and red bow tie.

Today, I made a new little friend. At the age of five, he is fluent in three different languages: French, Sanskrit, and English.

It was really nice to meet you, Hiten. pic.twitter.com/fm0K0TlI2O

A Facebook page dedicated to Hiten Kaushik shared more glimpses from his meeting with Manish Sisodia. In a video posted online, the two can be heard conversing in Hindi.

“Thanks sir for your cooperation and blessings,” the five-year-old wrote while sharing photos with Aam Aadmi Party leader.

Hiten, a resident of Delhi, has a YouTube channel to showcase his talent for remembering names and places. Besides speaking English, French and Sanskrit, he has also memorised the names of all the states of India and the US.