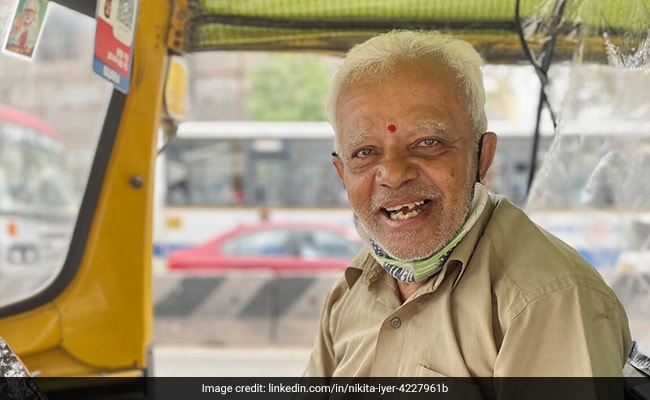 When Nikita Iyer, a Bengaluru-based professional, heard her autorickshaw driver speaking in impeccable English, she was taken aback at first. Curious, she asked him how he had acquired fluency in the language. What followed was “a very enriching 45 minutes” in which the 74-year-old auto driver opened up about his former life as an English lecturer and more. Ms Iyer documented her extraordinary encounter in a LinkedIn post which has gone viral online.

“This morning, on my way to work, stranded by an Uber auto driver in the middle of the highway, I must have had a worried expression on my face which made an old man driving a rickshaw stop and ask me where I wanted to go,” she wrote in her post.

Skeptical at first, she told the auto driver she needed to reach her office at the other end of the city and was running late. The driver responded in English, much to her surprise.

“He said, ‘Please come in Ma’m, you can pay what you want’ in impeccable English,” Ms Iyer wrote. “Taken aback with such kind behaviour, I said ok and what followed was a very enriching 45 minutes.”

When Ms Iyer, unable to contain her curiosity, asked the driver how he “spoke such good English”, the man revealed that he used to be an English lecturer in a Mumbai college and had done his MA and MEd. He even predicted Ms Iyer’s next question: “So you’re going to ask me why I am driving an auto right?”

On receiving an affirmative response, the auto driver opened up about his life. He revealed that his name was Pataabi Raman and he had been driving an auto for 14 years – ever since he retired from his post as a college lecturer. Mr Raman revealed that he worked as a lecturer in Mumbai because he could not find any jobs in Karnataka.

“The only question he was asked was, ‘What is your caste?’ and when he said his name was Mr. Pataabi Raman, they said, ‘We will let you know.'” Ms Iyer wrote in her post.

Fed up with this response he received from colleges in Karnataka, Mr Raman moved to Mumbai in Maharashtra where he found a job in a reputed college. He worked in that college in Powai for 20 years before he retired at the age of 60 and moved back to Bengaluru in Karnataka.

“Teachers do not get paid well. The maximum you can earn is 10-15,000/- and since it was a private institution, I don’t have pension. By driving a rickshaw I get at least 700-1500/- a day which enough for me and my girlfriend,” he told Ms Iyer, laughing.

When his passenger also laughed at his “girlfriend” remark, Mr Raman explained that he called his wife his girlfriend “because you must always treat them as equal.

“The minute you say wife, husbands think she’s a slave who must serve you but she is in no way inferior to me, in fact she is superior to me sometimes,” he explained.

The auto driver further revealed that he and his wife have a son who helps them pay their rent. “But beyond that, we are not dependent on our children. They live their life and we live ours happily,” he said.

Nikita Iyer concluded her post with a few words of praise for Mr Raman. “Not one complaint about life. Not one regret. So much to learn from these hidden heroes,” she wrote – and her sentiments were echoed by hundreds of LinkedIn users who commented on her post.

“Inspirational story,” wrote one person in the comments section.

“I admire this man and his grit, but it breaks my heart that people are not enraged at the discrimination he faced, and then the miserable professional benefits he got, that compelled him to keep driving an auto at 74,” another wrote.