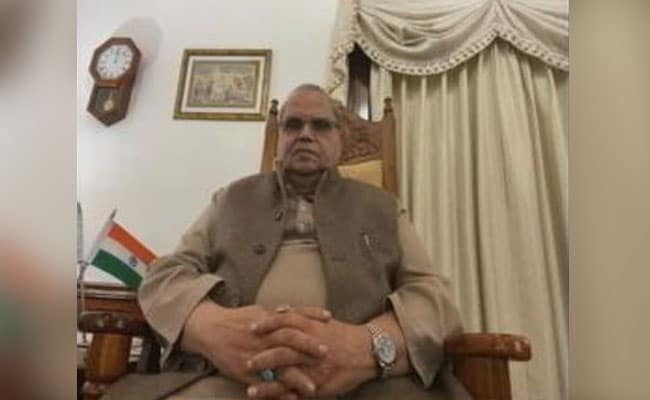 Mr Malik also demanded the sacking of a top district official after a video of him ordering cops to “crack the heads” of farmers emerged online, leading to furious protests from the opposition.

“Manohar Lal Khattar should apologise to the farmers… the Haryana Chief Minister is using sticks (lathis) on farmers. The central government did not use force… I told the top leadership not to use force,” Mr Malik told NDTV today, calling himself “a farmer’s son”.

“SDM (sub-divisional magistrate Ayush Sinha) should be fired immediately. He is not fit for the SDM post… the government is supporting him,” he said, referring to the controversial video.

No action has been taken against the officer as yet.

Mr Malik also told NDTV that he was disappointed by the fact the government had offered no consolation to the families of farmers who have died during these protests.

“600 farmers have died (during nationwide protests that began over a year ago)… but no one from the government spoke even a word of consolation,” he said.

Mr Malik, who has also served as the Governor of J&K, Goa, Bihar and Odisha, indicated he was not afraid of the government’s reaction to his statements, saying: “I am not in love with this post (of Governor)… whatever I say, I speak from my heart. I feel I have to return to the farmers.”

In March, Mr Malik told NDTV he expected a loss of support for the BJP in Haryana, UP and Rajasthan because of thousands of farmers who were (and still are) camped outside Delhi borders.

“If this movement continues like this then in the long term, BJP will lose out in western UP, Rajasthan and Haryana,” he had said; his statement then might ring some alarm bells in the BJP today, given that UP votes for a new government in a few months’ time.

How the situation escalated….This morning farmers had planned to assemble in a gurudwara sahib in Karnal before leaving for protest and this is how roads leading to that Gurudwara was blocked by the dist admin to thwart their assembly… pic.twitter.com/tgoWKotY3M

Haryana Police lathi charged the farmers after they attempted to stop a convoy carrying state BJP chief OP Dhankar from reaching the meeting.

The police responded with what they called “mild force”, but farmer leader Gurnam Singh Chaduni slammed the authorities for having “brutally lathi charged” peacefully protesting farmers.

The three farm laws have triggered widespread and furious protests from farmers; they say the laws will rob them of guaranteed prices for their crops and leave them at the mercy of corporate interests. The government, however, has insisted the laws will benefit farmers.

Several rounds of talks have been held but no resolution is in sight, with the government unwilling to scrap the laws (one of the farmers’ demands) and the farmers standing firm.

A central panel last met farmers’ leaders on January 22. There have been no talks since January 26, when a tractor rally in the national capital turned violent.

With input from PTI