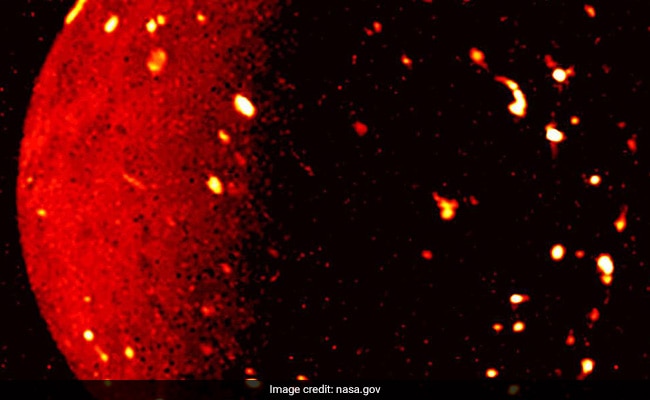 Flowing lava along with lava lakes can be seen as bright red patches in the image.

Jupiter’s moon Io was seen in infrared light in a picture taken by NASA‘s Juno spacecraft from 50,000 miles (80,000 kilometres) away. Flowing lava along with lava lakes can be seen as bright red patches in the image, which was captured on July 5 and released by the American space agency on Wednesday.

NASA had announced that its Juno mission is scheduled to obtain images of the Jovian moon Io on December 15 as part of its continuing exploration of Jupiter’s inner moons.”The team is really excited to have Juno’s extended mission include the study of Jupiter’s moons. With each close flyby, we have been able to obtain a wealth of new information,” said Juno Principal Investigator Scott Bolton of the Southwest Research Institute in San Antonio, in a press release. He continued, “Juno sensors are designed to study Jupiter, but we’ve been thrilled at how well they can perform double duty by observing Jupiter’s moons.”

The mission which is called Io Volcano Observer (IVO) informed that Io is “a true volcanic wonderland with hundreds of erupting volcanoes gushing tons of molten lava” and sulfurous gases at any moment. Io is subject to harsh tides that strain and crush the moon as it travels along its elliptical course due to the immense gravitational pull of Jupiter and the passing orbital tugs of sibling moons Europa and Ganymede.

According to Science Alert, Sctt Bolton, principal investigator for NASA’s Juno spacecraft, said in a press event at the American Geophysical Union’s Fall Meeting “You can see volcanic hotspots. We’ve been able to monitor over the course of the primary mission – over 30 orbits – how this changes and evolves.” Mr Bolton also informed that scientists have found more volcanic spots in the polar region than in the planet’s equatorial region.

NASA said that this exploration of Jupiter’s moon will be the first of nine flybys – two of them from just 930 miles (1,500 kilometers) away. “Juno scientists will use those flybys to perform the first high-resolution monitoring campaign on the magma-encrusted moon, studying Io’s volcanoes and how volcanic eruptions interact with Jupiter’s powerful magnetosphere and aurora,” the agency said in a press release.