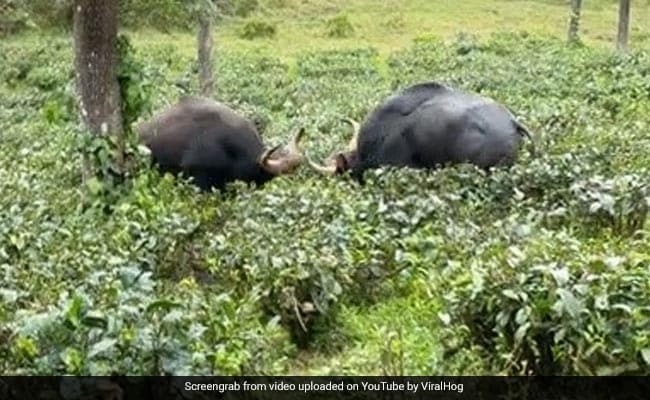 Bison or Indian gaur is a treat to the eyes of wildlife lovers. Its majestic stature and attention-grabbing horns are a sight to behold. A bison’s appearance can inspire awe. At the same time, its heavy build can incite fear in many minds – especially, when the animal is in a violent mood. And now, a video of two aggressive bison battling for territory has gone viral. The clip was shot at a tea estate in Valparai, Tamil Nadu, on January 15, by Kedar Dhepe. Here, we see two bison literally locking horns with each other.

Mr Dhepe said: “When I was in Valparai, Tamil Nadu, on January 15, 2021, I saw many wild animals in nearby tea estates. They visit these estates every day for food. We can see lion-tailed Macaque, wild elephants, and Indian Gaur (Bisons) easily. That day I was photographing a serpent eagle, one person came and told me that there were some bison. I went there. So I decided to stand there on road and I was nearly 10 feet away from the bison.” The note added, “He was watching me but he didn’t attack me. So every time I say, wildlife will not attack their own.”

Here’s an account of how the fight started. As per Mr Dhepe, “After 5-6 minutes they both are fighting, the sound of their horns is much louder and I was watching that from nearly 20-30 feet.”

Sharing his experience, Mr Dhepe added, “Adult Gaur defeated another sub-adult gaur. The moment when he picked the other gaur in the air was one of the crazy moments I’ll never forget in my life. My hands were shivering with some fear because I’m the single person watching that live fight. It was an amazing experience. Then I happily returned from Valparai.”

The clip has been viewed almost 1,500 times on  YouTube. A user commented, “If they’re not careful, one of them is going to have an eye out. Should be putting corks on the end of the horns for health and safety.”