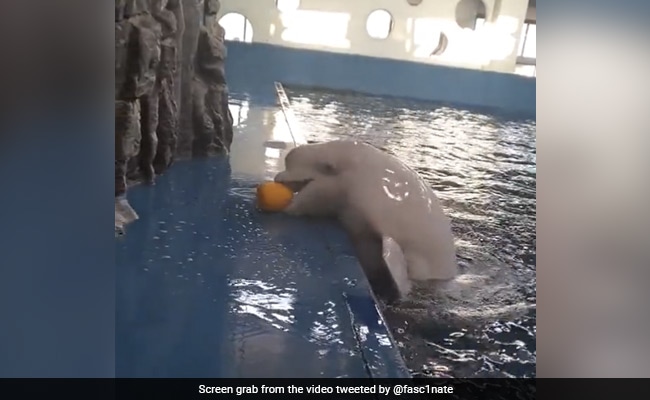 Beluga Whales or White Whales are known for their friendly nature. They are vocal communicators and social animals who use a wide variety of clicks, whistles and clangs. They are just adorable creatures and we have proof. An old video of a beluga whale trying to get a ball, which fell outside the tank, is going viral on the internet.

The video was posted on Twitter by Fascinating. In the short clip, the whale can be seen spitting water at the ball in an effort to get it to bounce off the wall and get closer so it can grab it. However, it is unsuccessful in its attempt as the ball does not come close enough. It tries again and, in a few moments, the ball comes a little close. The whale goes under water again to fill its mouth with water but realises it won’t be needed. It spits the water and then goes on to joyously grab the ball with its jaws and swims off.

The 20-second video has about 4.7 million views and one lakh likes. “How this beluga whale cleverly retrieves his ball,” reads the caption of the video.

How this beluga whale cleverly retrieves his ballpic.twitter.com/gddfihxYmb

“A beluga brain is just under twice the size of a human one and has more folds in its neocortex (surface area), indicating that the part of their brain that’s involved in problem solving and thinking is highly elaborated,” said a user.

“Man beluga whales feel like the dogs of the sea. Smart, friendly. What I wouldn’t give to have a pet beluga whale in my pool,” said another user.

Many users questioned why the whale was kept in a tank and said that it should be freed.

“There’s not a single reason to have whales and dolphins in tanks like that,” commented one person.

One user said, “as cute as this might be, ultimately it really isn’t because these mammals should not be kept in captivity like this…”