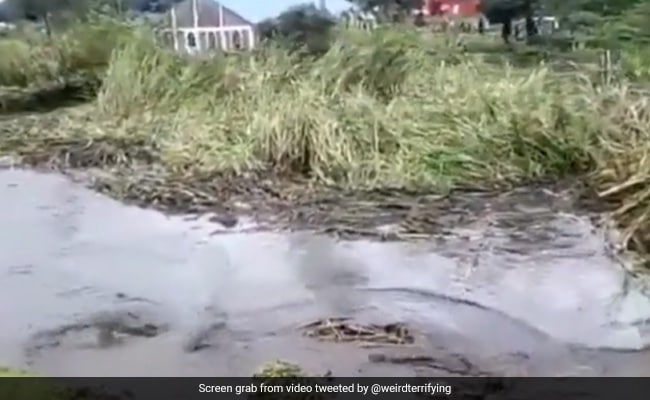 The sinkhole formed in Kericho, a town in the highlands west of the Kenyan Rift Valley

The 37-second clip was posted by the Twitter handle @weirdterrifying, with a caption that reads, ”Somewhere in Kenya.”

One user commented on the video and wrote, ”Yeah, I think that was an episode of Stranger Things.” Another commented, ”This is what they call a sinkhole. Unpublished geographers deemed this to be an unbelievable phenomenon of plants rebelling against humanity’s deeds against them. The pesticides etc they’re regrouping so watch out for the plantageddon that’s coming your way.”

A third wrote, ”Imagine standing directly above a bottomless pit, and filming in awe as it swallows everything around it at an increasing pace, and not recognizing the danger below your feet. Another joked saying, ”Mother Earth is making a smoothie.”

According to a Yahoo News report, the sinkhole formed in Kericho, a town in the highlands west of the Kenyan Rift Valley. The region where this fascinating natural phenomenon occurred is part of the East African Great Rift Valley, which is in the process of splitting the African plate into two separate plates.

Targeted Killings In Kashmir: Terror Reality Check For the Government