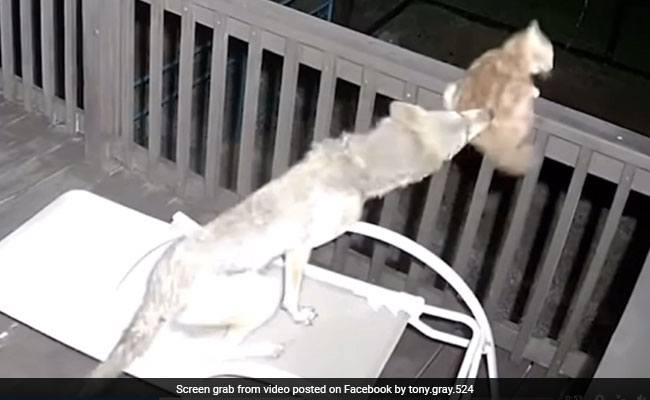 A feisty and fearless cat recently survived a frightening encounter with a coyote and the whole thing was caught on camera.

Tony Gary, who owns a house in Texas, US, shared the heart-stopping video on Facebook. The clip shows a skinny coyote repeatedly charging and attempting to maul a cat on Mr Gary’s back porch in the middle of the night.

Watch the wild video below:

The clip has gone viral on social media. It has been viewed more than 24,000 times and has received hundreds of comments. While one user said, “OMG! that was a close call.. that poor cat probably never felt such fear,” another wrote, “Did the cat survive or did the coyote kill him down on the ground??? This is so painful to watch!”

In the footage, the coyote chases the cat up onto a porch and aggressively tries to bite it. On the other hand, the feline hides under a deck, while the coyote remains undeterred and continues trying to get to the cat. A tug-war ensues between the two animals.

At one point, the kitty is seen desperately trying to climb onto a wooden railing, only to end up in the coyote’s jaws. However, the cat manages to free itself from the predator’s jaw and push it away with its front paws.

The coyote then again makes an attempt to take a bite out of the cat, but the feline quickly scrambles up a wooden porch column and out of harm’s way. In the end, the coyote is seen taking a few laps around the porch before recognising its defeat and scampering away. The terrified cat, on the other hand, was left hugging to the column for more than a minute before losing its grip and tumbling down.

“Someone almost lost a cat,” Mr Gray wrote on Facebook of the animal’s very close call. It is still unknown what eventually became of the cat and there has also been no word as to the identity of the cat’s owner or the feline’s location after it disappeared from the video.