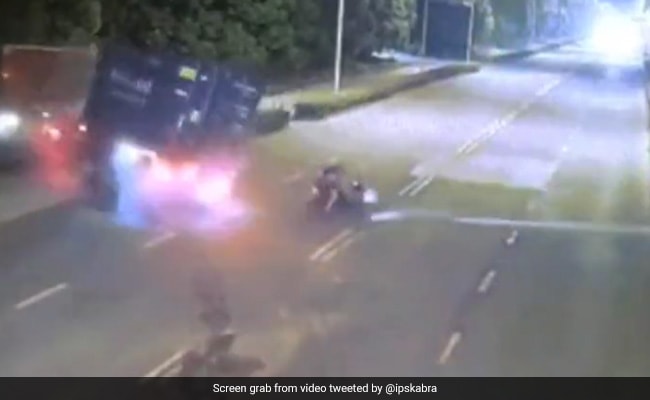 The location where this incident took place is yet to be known.

“Maintain such speed that an accident never happens. Others are also safe, you are too,” Mr Kabra wrote in the caption in Hindi.

In the video, a person riding a motorcycle is crossing a street at full speed. Moments later, a massive truck emerges seemingly from nowhere, almost colliding with the rider. However, fortunately, the man riding the bike escapes the incident unscathed, despite a very close call.

Mr Kabra shared the undated video on Thursday and since then it has accumulated more than 81,000 views and nearly 700 likes. The post drew various responses from users.

“The two wheeler is at fault. When you come in to the main carriage way, you stop look and proceed,” wrote one user. “I firmly believe that legal age for driving must be 25 years. It must be allowed when people can understand value of family for themselves and society,” said another.

A third user commented, “Sir, the motorcyle person was at fault here. Everyone is in a hurry to go home but they must go carefully.” A fourth added, “Why can’t we have strict laws, this specific incident could end badly for both the vehicle. Why can’t we just cancel the license for one responsible. This isn’t less than attempted murder, if no stringent action taken then they will kill someone else some other day.”

The location where this incident took place is yet to be known.

Meanwhile, in a similar incident, an elderly man recently escaped death after being knocked down by a bus while crossing the road in the Powai area of Mumbai. The incident took place outside the Everest Heights Building near the Lake Side complex. CCTV footage showed the man coming under the bus, and then miraculously appearing from behind the vehicle unscathed.

BAFTA 2023: RRR And All That Breathes On The Longlist