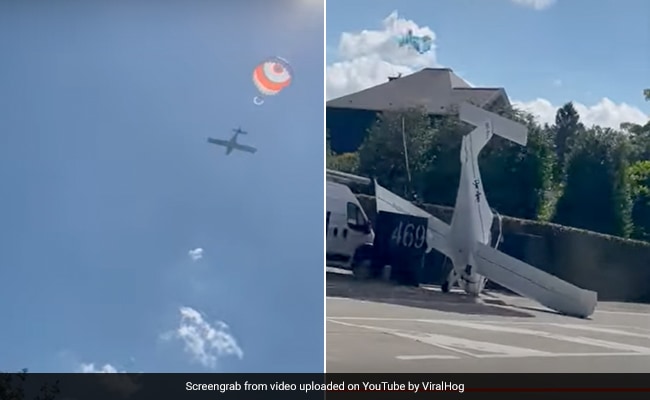 A Belgian pilot recently survived a plane crash that saw his small aircraft parachute nose-first down to Earth after a mid-air emergency.

A video provided by Viral Hog captured the descent of the aircraft. It showed the small plane hanging under the canopy of the red and white parachute, swinging from side to side in the wind. The aircraft appeared to be travelling slowly at first, however, as it approached the ground it is seen coming down with speed.

At the end of the video, a loud crash is heard as the plane landed propeller first on the side of a road in Sint-Andries, Bruges. The aircraft landed in the same position as it was when it was coming back to Earth – tail pointing up towards the sky.

According to Sky News, the Bruges police informed that the two-seater aircraft caused minimal damage to a street sign and fence in the area. The pilot also managed to walk free from the plane and is now being treated for minor injuries.

The officials described the pilot as an experienced flyer. They revealed that his life was almost certainly saved by the plane’s Ballistic Recovery System (BRS), which launches the parachute.

Now, the aviation authorities have launched an investigation into the cause of the crash. New Zealand Herald separately reported that the plane involved in the incident was a DynAero MCRO1 – a two-seater lightweight plane constructed from carbon fibre.

Meanwhile, this comes after a pilot earlier this month made an emergency landing on a busy highway in the US. On July 3, pilot Vicent Fraser was flying a single-engine aircraft with his father-in-law when he was forced to land on a four-lane highway in North Carolina as his plane’s engine began to fail.  The Swain County Sheriff’s Office shared the footage that was taken from Mr Fraser’s perspective as he made the tense landing.

In the clip, the plane appears to fly low to the ground, hovering over several cars before making contact with the road and barely missing a string of power lines. Eventually, Mr Fraser was able to land the plane smoothly, veering off the highway to a side street.