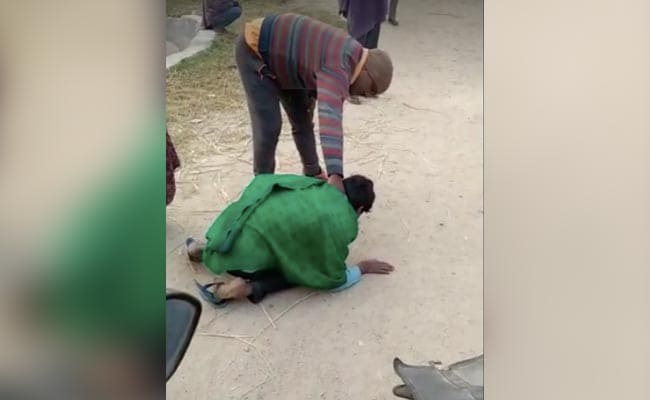 The accused can be seen holding one of the men by the neck and forcing them to the ground.

A candidate for the post of Panchayat head in Bihar’s Aurangabad district who lost the election has been arrested after a video of him assaulting two Dalit men went viral.

The candidate, Balwant Singh, has been accused of blaming the Dalit community for his loss and beating up two people from the community as they allegedly did not vote for him.

Balwant can be heard mentioning that he paid the two voters, and they still didn’t vote for him. He is seen verbally abusing the two men and punishing them by making them do sit-ups while holding their ears.

He then proceeds to physically assault one of them and forces him to spit on the ground and lick it. He can be seen holding him by the neck and forcing him to the ground.

NDTV cannot independently verify the authenticity of the video that has surfaced today.

Balwant has alleged that the two men were creating nuisance after getting drunk, and he punished them for it after they got sober. The video, however, establishes that Balwant was talking about having paid them.

The police have acted swiftly and arrested the accused after directions from the district’s Superintendent of Police Kantesh Kumar Mishra. The matter is being investigated, Mr Mishra said.