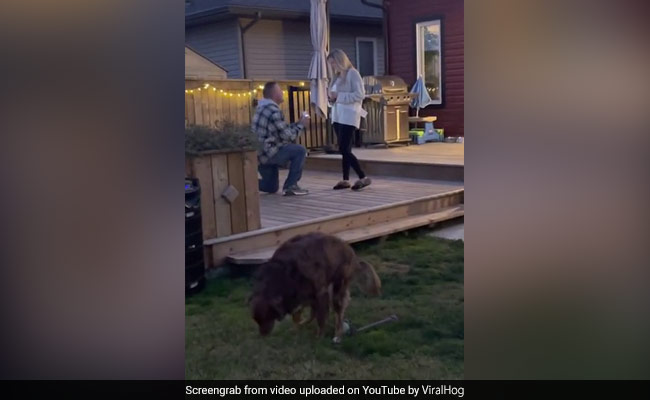 A marriage proposal is often one of the most memorable events of an individual’s life. Even for onlookers, such romantic gestures can induce goosebumps. However, there are certain marriage proposals that become unforgettable for completely unforeseen reasons. The video of one such proposal has gone viral and is tickling the funny-bones of internet users. The 36-second clip shows a man just about to propose to his girlfriend when a dog enters the frame for, well, a potty break. The hilarious video was shared by ViralHog and has, so far, been viewed over 12,000 times.

According to the caption, the incident took place on October 2 at Fort McMurray in Alberta, Canada. The person who recorded the video wrote, “The video is of my fiance proposing to me. We later noticed in the video that one of my Australian shepherds Tucker decided to have a bathroom break right in the middle.”

The video starts with the man delivering a speech, saying he was happy to have his family and friends around. Just when he says “I want to make this one a little more unforgettable” and turns to pick up the ring box, the dog comes into the frame and poops on his parade, literally! The dog’s bathroom break happens almost at the same time as the man was going down on one knee to propose.

While the woman says “yes” to the proposal, the dog finishes its bathroom break and moves aside. However, the couple doesn’t seem to have noticed the dog in the act. The woman accepts the proposal and hugs the man, while their friends clap from the side.

One user posted a funny comment from the point of view of the dog. “The dog: why are they clapping? I do this every day”, wrote the user.

Another commented, “Doggo: This is what I think about marriage!”

Different stances came up in the comments.

One user, Tammy Huennerkopf, wrote, “Lol, your dog just made the moment unforgettable. Thanks for the laugh”.

Another called it “perfect timing”.

What do you think?