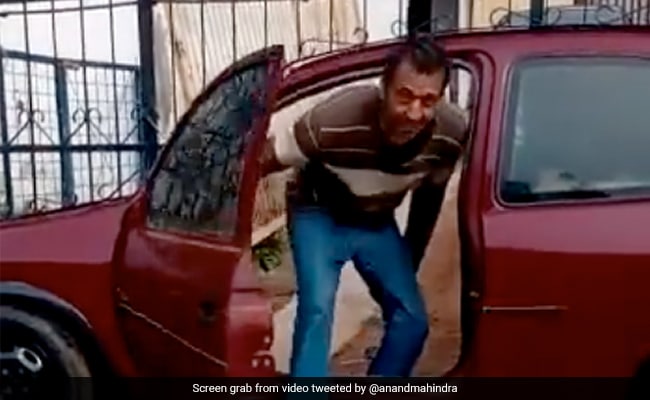 Anand Mahindra was amazed to see the unique gate installed by the man.

Anand Mahindra is an avid social media user. He often shared fascinating posts that pique the interest of internet users. In his latest tweet, the Mahindra Group Chairman has shared a video which shows a unique idea for an entrance gate. Posted just hours ago, the video is going viral with more than 1.54 lakh views and over 7,000 likes.

The undated video posted by Mr Mahindra shows a large black gate with the body of a car embedded into it. When it is moved, the wheels of the car are seen rolling as the gate closes.

The man, who was controlling the gate, is then seen exiting through the door of the car.

This person is:
1) A passionate car lover?
2) An introvert who doesn’t want anyone to try and enter his home?
3) Someone innovative with a quirky sense of humour?
4) All of the above? pic.twitter.com/CZxhGR7VDb

Amazed by the video, Mr Mahindra turned his post into a quiz by asking, “This person is: 1) A passionate car lover? 2) An introvert who does not want anyone to try and enter his home? 3) Someone innovative with a quirky sense of humour? 4) All of the above?”

“It’s auto matic gate,” said one of them. “Passionate car lover …. his smile is too broad to be an introvert… but yes, he has a sense of humour!” tweeted another.

Just days before India’s Independence Day, Mr Mahindra had shared a photo taken by him 47 years ago on Twitter and it went viral.

Mr Mahindra said that the photo was taken by him in Toledo, Spain, in 1975.

The post received more than 5,000 likes and over 200 users re-tweeted it. They also praised Mr Mahindra’s photography skills.