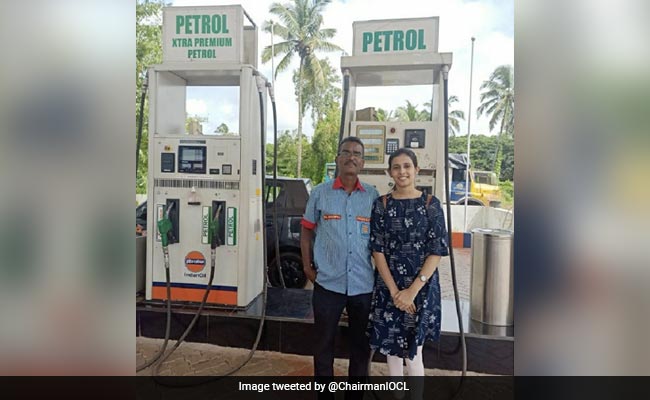 Arya Rajagopalan with her father at the petrol pump where he has worked for over a decade.

Indian Oil Corporation Chairman Shrikant Madhav Vaidya has shared a post of appreciation for a petrol pump attendant daughter’s who has secured entry to one of the country’s most prestigious institutes for higher education. Arya Rajagopalan, daughter of a customer attendant at an Indian Oil petrol station in Kerala, has made it to IIT Kanpur in a feat that is being widely applauded on social media. Announcing the news, Mr Vaidya wrote on Twitter: “Let me share an inspiring story of Arya, daughter of #IndianOil’s customer attendant Mr. Rajagopalan. Arya has made us proud by securing entry in IIT Kanpur.”

Alongside the post, he shared a picture of the proud father with his daughter, taken at the petrol pump where the former had worked for the last 15 years. “All the best and way to go Arya!” the chairman of Indian Oil tweeted Wednesday.

Let me share an inspiring story of Arya, daughter of #IndianOil‘s customer attendant Mr. Rajagopalan. Arya has made us proud by securing entry in IIT Kanpur.

All the best and way to go Arya! pic.twitter.com/GySWfoXmQJ

The post has gone viral with over 12,000 ‘likes’ on the microblogging platform. In the comments section, many praised Arya for her hard work.

Union Minister for Petroleum and Natural Gas Hardeep Singh Puri tweeted his best wishes for the IIT student. “Arya Rajagopal has done her father Sh Rajagopal Ji & indeed all of us associated with the country’s energy sector immensely proud,” he wrote.

Heartwarming indeed.
Arya Rajagopal has done her father Sh Rajagopal Ji & indeed all of us associated with the country’s energy sector immensely proud.
This exemplary father-daughter duo are an inspiration & role models for Aspirational New India.
My best wishes.@IndianOilclhttps://t.co/eiU3U5q5Mjpic.twitter.com/eDTGFhFTcS

Congratulations to Ms Arya Rajagopalan and to her proud parents!????????????

I also Congratulate and appreciate the Chairman tweeting the news! ????????

IOCL may announce 100% scholarship to children of employees who get admission in top 500 universities of the world.

Many hailed Arya an inspiration as they tweeted their congratulations

Inspiring, heartwarming and much needed piece of positivity especially in current times. Best wishes to the young girl, to her family and to IOCL

Inspiration to all young people who are working hard to carve a respectable space in life …#skyisthelimithttps://t.co/GNRI08eZuH

According to the Republic, Arya has secured MTech from IIT Kanpur. “I would be wonderful if my daughter gets placed in Indian Oil Corporation, the same company I worked for since 2005,” Mr Rajagopalan said when asked if he has any dreams for his daughter.