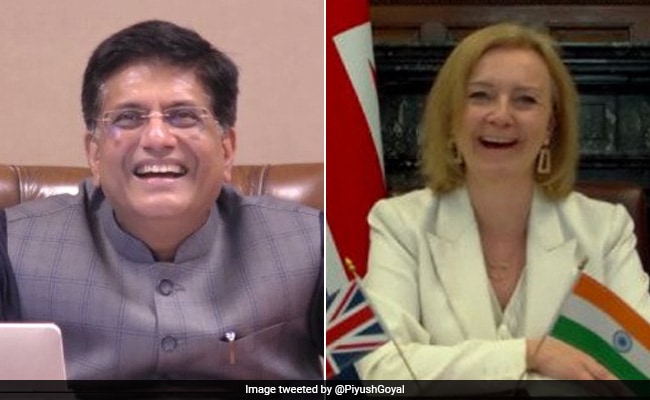 Increasing UK-India trade has been dubbed a “huge opportunity” by the UK.

Commerce and Industry Minister Piyush Goyal concluded a virtual meeting with his UK counterpart, Liz Truss, on Monday during which they agreed on the next steps to launch negotiations for a UK-India trade agreement, the UK government said.

The UK’s Department for International Trade (DIT) said the talks between the two ministers focussed on the “scope and ambition” for a UK-India free trade agreement (FTA), following the close of the UK’s formal consultation process ahead of the negotiations on August 31.

“They discussed the findings from the consultation and agreed on the steps to get ready to launch negotiations later this year — including the start of a series of trade working groups from September,” notes a DIT readout of Monday’s meeting.

“They also discussed the newly established Enhanced Trade Partnership, and confirmed their commitment to timely implementation of the market access package,” the DIT said.

“The International Trade Secretary reaffirmed her ambition to negotiate a trade agreement that delivers results for the British people and businesses including those in digital and data, tech and food and drink. Both ministers agreed that continuing to engage with the business community was vital throughout the forthcoming negotiations,” DIT said.

According to officials, findings from the DIT’s public consultation will be published before the start of formal trade negotiations as part of a wider package outlining a strategic rationale for the FTA, including the UK’s negotiating objectives and economic analysis of a potential deal.

Earlier, the UK trade ministry had said that preparations towards an FTA with India are progressing. A deal would represent a major boost for UK exporters, lowering tariffs, easing regulation, and driving up bilateral trade which totalled GBP 23 billion in 2019, it noted.

Increasing UK-India trade has been dubbed a “huge opportunity” by the UK, given India’s position as one of the world’s biggest and fastest-growing economies and home to more than a billion consumers.

“I see the UK and India in a sweet spot of the trade dynamics that are building up,” Truss said at a City of London Corporation event celebrating the UK-India economic partnership last week.

“We are looking at a comprehensive trade agreement that covers everything, from financial services to legal services to digital and data, as well as goods and agriculture. We think there is a strong possibility for us to get an early agreement, where we lower tariffs on both sides and start to see more goods flowing between our two countries,” she said.

Mr Goyal has also been on the record saying that an “early harvest” trade deal with the UK is in the offing.