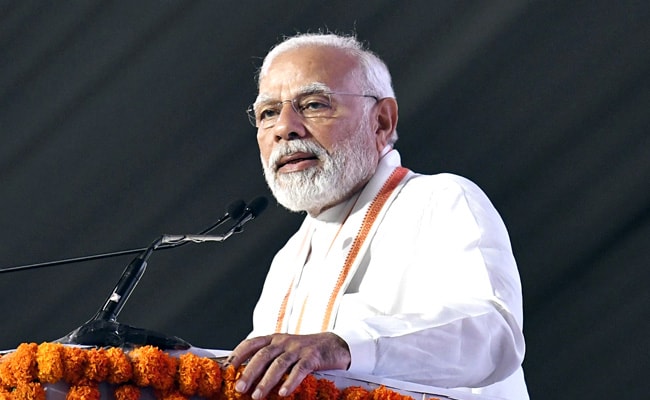 This is not a sign of a good politician, said Sanjay Raut targeting PM Modi. (File)

Shiv Sena (UBT) leader Sanjay Raut on Sunday said that on the one hand Prime Minister Narendra Modi mediates in the Russia-Ukraine war, while on the other he turns a blind eye to the simmering Maharashtra-Karnataka border dispute, which is “not a sign of a good politician”.

In his weekly column ‘Rokhthok’ in the party mouthpiece Saamana, Mr Raut also said that the border dispute between Maharashtra and Karnataka was a struggle for humanity, and not a fight between the people and governments of the two states.

Maharashtra has been long claiming Belagavi and surrounding border areas in north Karnataka as they have a sizable Marathi-speaking population. The decades-old border dispute resurfaced again after Karnataka Chief Minister Basavaraj Bommai recently claimed that some villages in Sangli district in Maharashtra have passed a resolution to become a part of the southern state owing to the lack of basic facilities there.

“The struggle of the Marathi-speaking population in Belagavi and nearby areas who were included in Karnataka against their wishes during the reorganisation of states, cannot be crushed cruelly,” Mr Raut said. If the central government and the Supreme Court cannot resolve the issue, where should one seek justice from, the senior leader of the Shiv Sena (Uddhav Balasaheb Thackeray) asked.

“PM Modi mediates in the Russia-Ukraine war, but turns a blind eye to the Maharashtra-Karnataka border dispute. This is not a sign of a good politician,” he alleged.

It is good that Union Home Minister Amit Shah took an initiative towards resolving the issue, but the question is whether the central government will take a neutral stand, the Rajya Sabha member asked.

Mr Raut demanded that parliament should find a solution to the border dispute.

“Instead of expecting the Supreme Court to redirect the case to parliament, what is the harm if parliament finds a solution to this at the earliest,” he suggested.

He said that Karnataka Chief Minister Bommai should have held talks with the organisations and leaders of Marathi-speaking people in Belagavi to resolve the dispute instead of making provocative statements against Maharashtra.

“It is clear that Maharashtra Chief Minister Eknath Shinde is weak to confront Bommai’s aggressive stand of claiming areas of Maharashtra,” he said.

During the meeting of the two Chief Ministers called by Amit Shah over the issue, it was decided that the status quo should be maintained, Mr Raut added.

Row Over Kiren Rijiju’s Arunachal Tweet With Pic From 2019