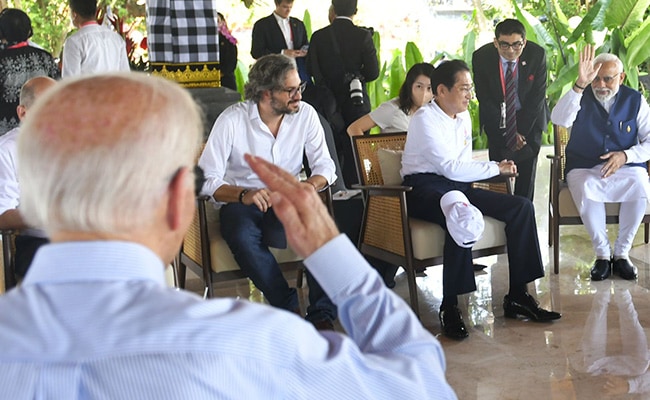 Prime Minister Narendra Modi and US President Joe Biden exchanged greetings when they met during a visit to a mangrove forest in Bali on the sidelines of the G20 summit.

This came a day after President Biden walked over to the Prime Minister to shake his hand before they took their seats next to each at the summit.

Photos shared by Prime Minister Modi on Twitter showed world leaders planting mangrove saplings to send out a message on the fight against climate change.

With G-20 leaders at the Mangrove Forest in Bali. @g20orgpic.twitter.com/D5L5A1B72e

In the video of the two leaders’ interaction yesterday, Prime Minister Modi at first appears to have missed seeing President Biden approaching him, but then turns around quickly for a handshake and gives him a hug. As President Biden proceeds to his seat, PM Modi says something to him that makes him laugh.

The warm interactions between the Prime Minister and the US president come against the backdrop of India’s refusal to toe the West line on the Russia-Ukraine conflict. India has repeatedly called for a ceasefire and a pressed for a diplomatic solution to the conflict, but abstained from taking a side.

On the question of buying oil from Russia at a time when the Vladimir Putin-led dispensation faces steep sanctions over its attack on Ukraine, India has said there is “no moral conflict” whatsoever.