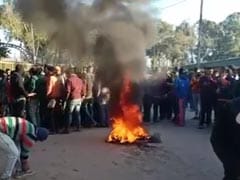 The killings have triggered protests in the area.

Two civilians were killed in a firing incident outside an army camp in Jammu and Kashmir’s Rajouri. The killings have triggered protests with protesters throwing stones at the camp.

The army said the civilians were killed after terrorists opened fire at them.

“In an early morning firing incident by unidentified terrorists at Rajauri near Military Hospital, there have been fatal casualties of two individuals. The Police, security forces and civil administration officials are on the site,” said the army.

Police said the victims were working in the camp and their bodies were found near the camp.

Both the men were shot when they were approaching the main gate of the camp at around 6 am.

The victims have been identified as Shalinder Kumar and Kamal Kishore.

The relatives of victims and protesters contest the army claim. They allege both the civilians who were working at the army camp for last 15 years were killed in army firing.

Police sources said they are ascertaining the reasons behind the firing.