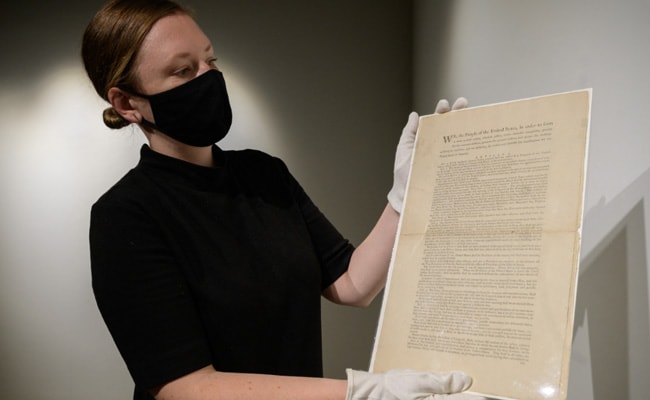 A page of the first printing of the US Constitution is displayed at an auction.

An extremely rare original copy of the American constitution, signed in 1787 in Philadelphia, will soon be auctioned with an estimated value of between $15 million and $20 million, Sotheby’s announced Friday.

It is one of only 11 known surviving copies and will be sold in New York in November, the auction house said.

Sotheby’s is exhibiting until Sunday a private collection of American constitutional documents dating from the revolutionary period, 1776 to 1789.

Included is the constitution, signed on September 17, 1787 at Philadelphia’s Independence Hall by America’s founding fathers, including George Washington, Benjamin Franklin and James Madison and ratified the following year.

“It’s incredibly rare,” said Selby Kiffer, a manuscripts and ancient books expert at Sotheby’s, noting that it was probably printed on the eve of the signing.

“This was probably printed in an edition of 500 copies. Now only eleven are known to survive and this is the only one in private hands,” he said.

Kiffer doesn’t worry if the famous document, with those immortal opening words “We the People”, goes abroad, even though he thinks it will stay in the United States.

“It’s the longest-serving charter of government in the world. I think it’s already been a model for other constitutions around the world,” he explained.

“But I think when it comes down to it, no one values American history more highly than Americans and I would be surprised that the new owner was not an American,” Kiffer added.

The document is in excellent condition and currently belongs to American collector Dorothy Tapper Goldman.

Sotheby’s is exhibiting the collection of American constitutional history at a time of tense and polarised political atmosphere in the US.

On Saturday, supporters of former president Donald Trump are due to demonstrate in support of rioters arrested for storming the US Capitol on January 6.

“I think it’s very interesting the constitution is always in debate but I think under the current political climate it’s as much discussed now as it was when it was being debated for ratification,” said Kiffer.