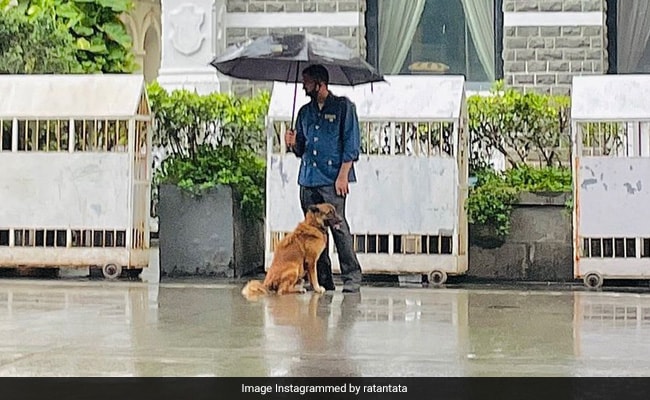 Monsoon often has a devastating impact. However, long before the rains wreak havoc on humans, it has a considerable impact on the innumerable animals that live on the streets of our county. And during such tough times, a little thought on our part can go a long way in helping the animals. An example of this was caught on camera when an employee of the Taj Mahal Palace in Mumbai shared an umbrella with a stray dog during the rain. The picture soon began to do the rounds on social media and even caught the attention of Tata Group’s Chairman Emeritus Ratan Tata. The hotel is a part of the Tata Group.

Posting the image on his Instagram account, Mr Tata said, “Sharing comfort with the strays this monsoon. This Taj employee was kind enough to share his umbrella with one of the many strays while it was pouring quite heavily. A heartwarming moment captured in the busy hustle of Mumbai. Gestures like these go a long way for stray animals,” with a heart emoji.

The social media upload grabbed the attention of Ratan Tata’s followers who rushed to the comments section to praise the man for his act of kindness. Content creator and model, Scherezade Shroff shared some information about the adorable dog in the picture. She wrote, “That’s Speedy. At least that what all the Taj boys call this good boy.”

Another user wrote, “Man with a golden heart,” while many others flooded the comments section with heart and heart-eye emojis.

Take a look at the photo here.

The photo has gone viral with over a million ‘likes’ on the photo-sharing platform.

Industrialist Ratan Tata’s love for dogs is well-known. Such is the 83-year-old’s fondness for dogs that Bombay House, the global headquarters of Tata Group, has a special kennel dedicated to stray dogs living around the area.

Mr Tata even has a favourite among the many dogs housed here — a black and white pooch named Goa. Sharing the secret behind his furry friend’s unique name, Mr Tata said in an Instagram post last year: “He was a stray puppy when he got into my colleague’s car in Goa, and came all the way to Bombay House, hence the name Goa.”

Mr Tata’s had earlier even referred to Goa as the “friend” he looked forward to meeting at the office, every day.