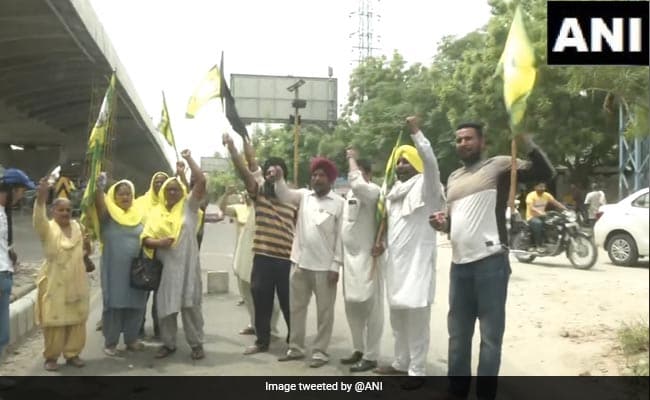 Farmers blocked roads and highways in Punjab for two hours on Sunday in protest against the lathicharge on peasants in Haryana.

Owing allegiance to various farmer bodies, the protesters burnt the effigies of the BJP-led government in Haryana for using “force” on farmers in Karnal.

Around 10 people were injured on Saturday as police allegedly lathicharged a group of farmers disrupting traffic movement on a national highway while heading towards Karnal to protest against a BJP meeting.

The two-hour-long agitation in Punjab that started at 12 noon also caused inconvenience to commuters, who got stuck in traffic snarls at several places.

The protest caused disruption of vehicular traffic at many places and affected routes along the Jalandhar-Pathankot highway, Ludhiana-Chandigarh highway, Amritsar-Ganganagar highway and Ferozepur-Zira road.

During a protest in Amritsar, Mr Pandher said Haryana Chief Minister Manohar Lal Khattar should resign on moral grounds as he has no right to continue on the post after the police action on farmers.

The Bharatiya Kisan Union (Ekta Ugrahan) staged protests at 56 places in the state and castigated the “shameful” act of the Khattar government.

“Deplorable assault on the protesting Farmers is an attack on Fundamental Rights of every Indian…earned after innumerable sacrifices during the freedom struggle, It impinges and impedes on the spirit of the Constitution and Breaks the Backbone of India’s democracy!!” he said in a tweet and also shared a video of “use of force” by police on farmers in Haryana.

Deplorable assault on the protesting Farmers is an attack on Fundamental Rights of every Indian … earned after innumerable sacrifices during the freedom struggle, It impinges and impedes on the spirit of the Constitution and Breaks the Backbone of India’s democracy !! pic.twitter.com/7nqmDBx3Dm

Punjab Chief Minister Amarinder Singh had expressed shock on Saturday at the “brazen brutality” of the Haryana police and had slammed Mr Khattar for “unleashing such a vicious assault on the peacefully protesting farmers”, many of whom were injured in the lathicharge.