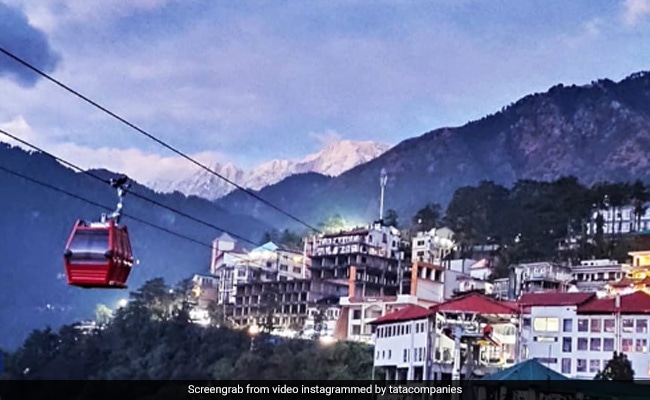 Dharamshala Skyway: This ropeway will connect the tourist hotspots of Dharamshala and McLeodganj.

A long-pending demand of tourists travelling between Dharamshala and McLeodganj in Himachal Pradesh has been fulfilled. Now, visitors can reach McLeodganj from Dharamshala in just five minutes, instead of undertaking a 45-minute road journey. The Dharamshala Skyway, an aerial ropeway project developed by the Tata Group to connect the two tourist hotspots, is ready.

In an Instagram post, the Tata Group said that the 1.8-km-long Dharamshala Skyway was ready to “transform travel” between Dharamshala and McLeodganj. “A 45-minute ride in just 5 minutes,” it added.

In less than an hour of being shared, the post was viewed over 2,100 times.

Developed in a private-public partnership by TRIL Urban Transport Private Ltd, the ropeway can reportedly carry 1,000 passengers per hour per direction. During the peak tourist season, traffic bottlenecks are common on the road between Dharamshala and McLeodganj. However, now that the ropeway is operational, it will reduce the distance by 9 kilometres and save around 40 per cent of the travel time.

Built at an estimated cost of about Rs 207 crores, Mr Thakur stated the Dharamshala Skyway has two stations and 10 towers, and the technology employed was Mono Cable Detachable Gondolas System, and has 18 gondolas (cabins). The top station is right in front of the Dalai Lama Temple in McLeodganj.

The cost of one-way travel for one person is fixed at Rs 300 and two-way tariff is Rs 500 per person.