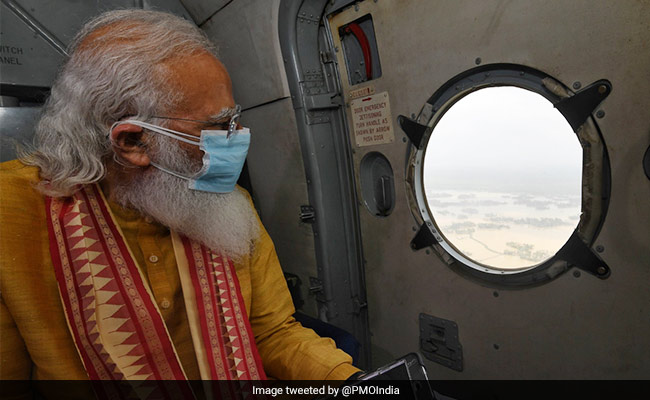 Cyclone Yaas made landfall on the north Odisha coast on Wednesday

The announcement came after the Prime Minister took aerial surveys in Odisha and Bengal to assess the scale of damage. The centre has assured all help for restoration and rebuilding of the infrastructure in the affected areas.

An inter-ministerial team will visit the states to assess the full extent of damage, said the Prime Minister’s Office.

The Prime Minister also announced Rs 2 lakh each for the families of each of those who died in cyclone-related incidents. A sum of Rs 50,000 would be paid to those injured in such incidents.

Bengal Chief Minister Mamata Banerjee has said that her state has faced losses to the tune of Rs 15,000 crore. Notably, the central government had provided Rs 1,000 crore in advance to West Bengal to deal with the devastation caused by Super Cyclone Amphan last May.

PM Modi had a 15-minute meeting with Chief Minister Mamata Banerjee at Kalaikunda Air Base in Bengal’s West Midnapore district to assess damage caused by Cyclone Yaas. Later, the Chief Minister skipped the review meet called by the Prime Minister.

The Prime Minister then took aerial surveys of regions affected by Cyclone Yaas, which caused devastation across South and North 24 Paraganas, Digha, East Medinipur and Nandigram districts of the state.

Earlier in the day, PM Modi met Odisha Chief Minister Naveen Patnaik in Bhubaneswar; after which he conducted an aerial survey of affected districts in that state.

Yaas made landfall on the north Odisha coast – about 20 km south of Balasore – on Wednesday with 130-140 km per hour winds and 150 km per hour gusts.

On May 19, after surveying the Cyclone Tauktae-hit Gujarat, PM Modi announced an assistance of Rs 1,000 crore for immediate relief work.

The move prompted protest from the NCP, a partner in the Maharashtra coalition government, that claimed that six states, including Maharashtra and Goa, suffered losses due to Cyclone Tauktae, but the Centre announced financial assistance only for Gujarat.